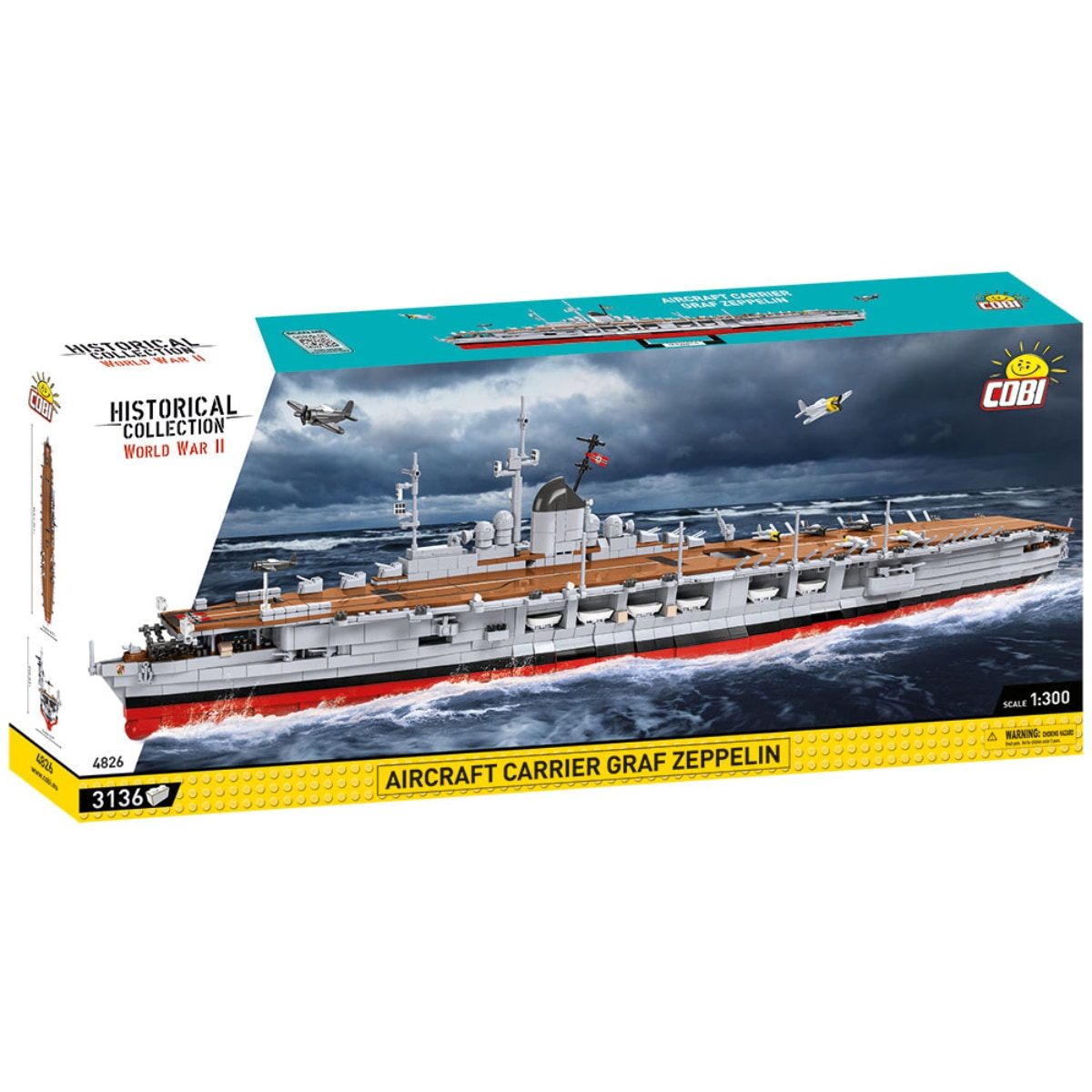 The COBI Graf Zeppelin Carrier Set 4826 (new for 2021) features 3,136 highly detailed brick parts and colorful, easy to read detailed instructions.  The COBI Aircraft Carrier Graf Zeppelin parts all work with the “other major brand” and you will be impressed the great quality and detail of both the parts and instructions. Ships Fast and FREE from our Billings, MT store.

The COBI Graf Zeppelin Carrier Set (4826) features 3,136 highly detailed brick parts and colorful, easy to read detailed instructions. All the COBI Aircraft Carrier Graf Zeppelin parts work with the “other major brand” and you will be impressed the great quality and detail of both the parts and instructions.

The COBI Graf Zeppelin Aircraft Carrier Set is part of COBI’s line of lego ships and submarines.  The Graf Zeppelin was a German Aircraft Carrier that never was finished during World War II and had it been finished it would have been a formidable ship. The Graf Zeppelin COBI Set includes six (8) micro German aircraft and as stated before, 3,130 parts, making it one of COBI Toys biggest WWII Brick sets.  All identifiers feature pad printed German markings so no finicky stickers are necessary.

Both collectors and brick enthusiasts will get value and hours of enjoyment from this COBI Graph Zeppelin Carrier set.  Whether you are buying to display or play, Cobi Brick sets will not disappoint.  Ships quickly from Billings, MT USA with tracking number.

One of the best things about COBI Bricks is their attention to detail and focus on models of historical significance.  The Graf Zeppelin Carrier Set is no exception! If you are like the Warbricks Team, you had no idea that the Germans had an aircraft carrier during WWII, and you would be partially right!  The Graf Zeppelin Aircraft Carrier was never finished but as you will see in the photos and documentation below, it did exist in an almost complete state for some time.

The COBI Graf Zeppelin Set will provide hours and hours of building fun!  COBI utilized highly detailed smooth parts with printed deck painting to earn the 1/300 scale kit respect in any collection.  For the first time, COBI utilized a working aircraft elevator on the deck (The COBI USS Enterprise Set didn’t even have that 🙁 )  The Pad printed parts will not wear out over time with hard play or dusting and even the aircraft feature two color patterns to provide added realism to the ships envisioned purpose of hosting maritime versions of German fighter planes and stuka dive bombers.

Another detail is COBI’s narrow,  transparent block that attaches to the bottom of the micro German aircraft which in turn imitates an aircraft taking off from the deck.   Add in the display stand and you will have a display model worth placing in any den, study or play room!

The German aircraft carrier Graf Zeppelin was the lead ship in a class of two carriers of the same name ordered by the Kriegsmarine of Nazi Germany. She was the only aircraft carrier launched by Germany and represented part of the Kriegsmarine‘s attempt to create a well-balanced oceangoing fleet, capable of projecting German naval power far beyond the narrow confines of the Baltic and North Seas. The carrier would have had a complement of 42 fighters and dive bombers.

Construction on Graf Zeppelin began on 28 December 1936, when her keel was laid down at the Deutsche Werke shipyard in Kiel. Named in honor of Graf (Count) Ferdinand von Zeppelin, the ship was launched on 8 December 1938, and was 85% complete by the outbreak of World War II in September 1939. Graf Zeppelin was not completed and was never operational due to shifting construction priorities necessitated by the war. She remained in the Baltic for the duration of the war; with Germany’s defeat imminent, the ship’s custodian crew scuttled her just outside Stettin in March 1945. The Soviet Union raised the ship in March 1946, and she was ultimately sunk in weapons tests north of Poland 17 months later. The wreck was discovered by a Polish survey ship in July 2006.

The ship’s primary offensive power would have been its aircraft complement. Graf Zeppelinwould have carried 42 aircraft as designed: 12 navalized Junkers Ju 87 “Stuka” dive bombers, 10 Messerschmitt Bf 109 fighters, and 20 Fieseler Fi 167 torpedo bombers.  Later during the construction process, the aerial complement was reworked to consist of thirty Ju 87s and twelve Bf 109s, and the Fi 167s were removed altogether.