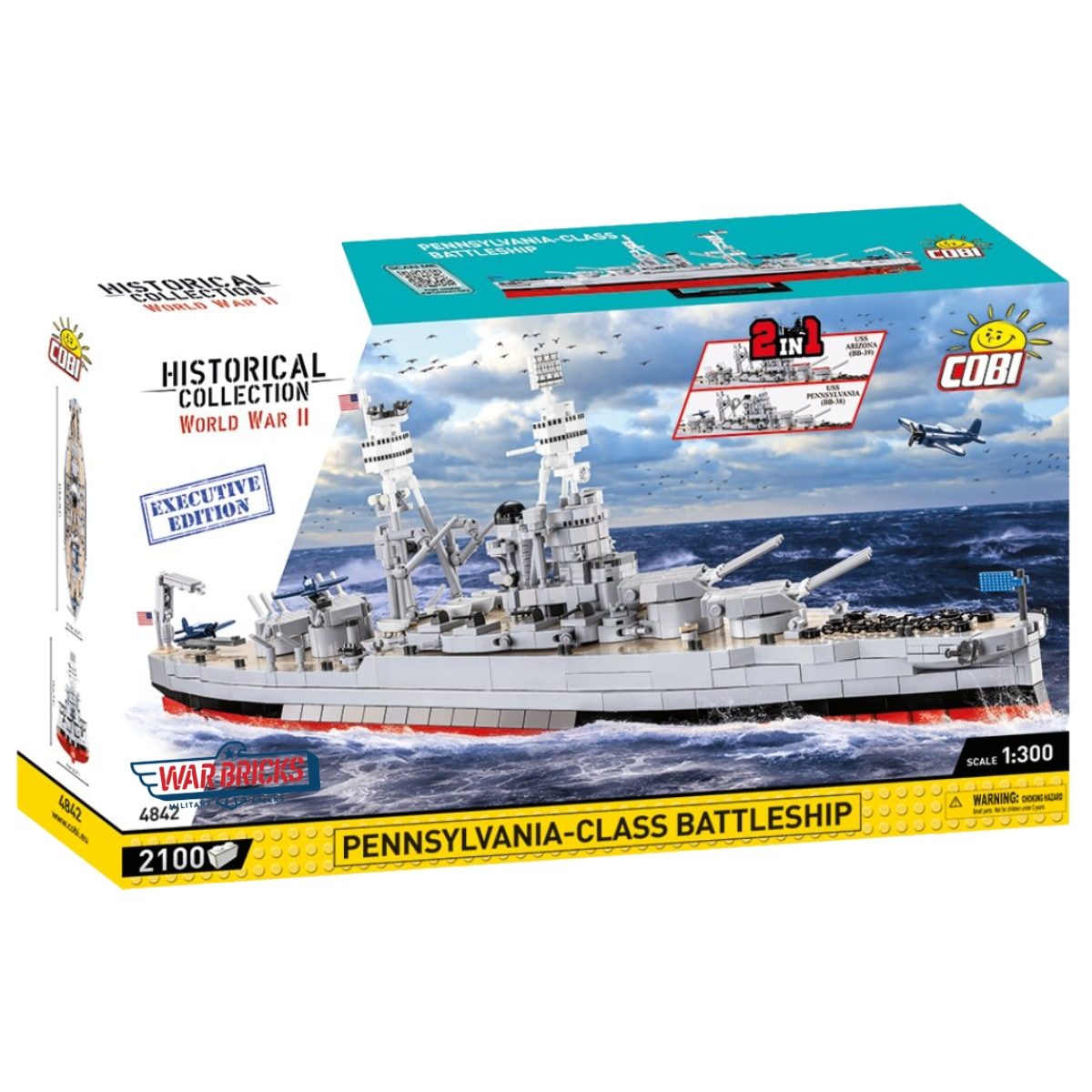 The COBI Pennsylvania Class Battleship Set comes with 2100 high quality parts that fit tightly so that your COBI Battleship set will be awesome for both display or play. It also comes with a name plate for the COBI USS Arizona and three micro airplanes if you purchase the Executive edition (COBI 4842)  Shipping is free over $50.

Speaking of parts, the Executive Edition COBI Pennsylvania Class Battleship comes with 2,100 high quality, Lego compatible parts that fit tightly so that your COBI Battleship Arizona set will be awesome for both display or play. It also comes with three (3) COBI mini aircraft. The standard edition will feature the COBI USS Arizona (BB-39) and will have 2046 parts.

The COBI Pennsylvania Class Battleship will be available in two versions that are both the same size and in 1/300 scale:

The COBI Pennsylvania Class Battleship series is perfect for displaying on an office shelf and is certain to be a great conversation starter. These sets are made in the EU (Poland) and are high quality brick sets.

All the COBI Pennsylvania Battleship (4842) part’s are pad printed which means there are no messy decals and you just need to follow the detailed instructions (included) in order to assemble the parts correctly.

About the COBI USS Arizona and Pennsylvania:

The COBI Pennsylvania Class Battleship (COBI 4842) set makes a great conversation piece and it will also make a great giver for the military brick collector in your life.

This is not a lego USS Arizona. It is built by COBI Bricks in Poland and is Lego compatible.

On 7 December 1941, the Japanese attack on Pearl Harbor sank Arizona in a tremendous explosion and slightly damaged Pennsylvania, which was in dry dock at the time. Arizona‘s wreck was later partly salvaged and is now a war memorial.

Pennsylvania came back into service more quickly than many of the other battleships present during the attack; it left on 20 December and was under repair in San Francisco until 30 March 1942. For the next several months, Pennsylvania was stationed on the United States’ West Coast, before being reassigned to Pearl Harbor as the fleet flagship for a short time (August to October). After another refit in San Francisco, which lasted until February 1943, the ship was sent to assist American forces engaged in the Aleutian Islands Campaign. During this time, Pennsylvania was nearly hit by a torpedo from Japanese submarine I-31, which was later sunk.