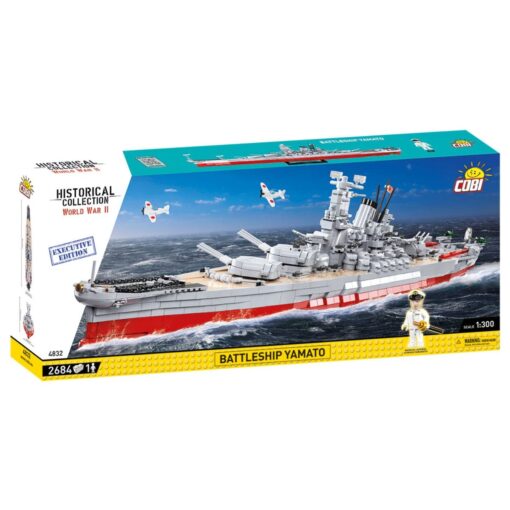 The Cobi Yamato set features 2400 highly detailed brick parts and colorful, easy to read detailed instructions.  The COBI Battleship Yamato Set (3083) parts all work with LEGO and you will be impressed with the great quality and detail of this Cobi set.

The Cobi Yamato set features 2400 highly detailed brick parts and colorful, easy to read detailed instructions.  The COBI Yamato Set parts all work with the “other major brand” and you will be impressed with the great quality and detail of this Cobi set.

The COBI Yamato Battleship Set  includes all the markings and stickers necessary to complete this set as an outstanding display piece in your home or office.

Both adults and military brick collectors of all ages will get hours of enjoyment from this Cobi Yamato set set.  Whether you are buying to display or play, Cobi Brick sets will not disappoint.  Ships quickly from Billings, MT USA with tracking number.

The Yamato-class battleships (大和型戦艦, Yamato-gata senkan) were two battleships of the Imperial Japanese Navy (IJN), Yamato and Musashi, laid down leading up to World War II and completed as designed. A third hull laid down in 1940 was converted to an aircraft carrier, Shinano, during construction.

Due to the threat of American submarines and aircraft carriers, both Yamato and Musashi spent the majority of their careers in naval bases at Brunei, Truk, and Kure—deploying on several occasions in response to American raids on Japanese bases.

All three ships were sunk by the U.S. Navy, Musashi while participating in the Battle of Leyte Gulf in October 1944, as part of Admiral Kurita’s Center Force, lost to American carrier aircraft; the still incomplete Shinano was torpedoed ten days after her commissioning in November 1944 by the submarine USS Archerfish; and Yamato, also ravaged by carrier planes, in April 1945 during Operation Ten-Go.

The design of the Yamato-class battleships was shaped by expansionist movements within the Japanese government, Japanese industrial power, and the need for a fleet powerful enough to intimidate likely adversaries.. Most importantly, the latter, in the form of the Kantai Kessen (“Decisive Battle Doctrine”), a naval strategy adopted by the Imperial Japanese Navy prior to the Second World War, in which the Japanese navy would win a war by fighting and winning a single, decisive naval action.

The final design called for a standard displacement of 64,000 long tons (65,000 t) and a full-load displacement of 69,988 long tons (71,111 t), making the ships of the class the largest battleships yet designed, and the largest battleships ever constructed. The design called for a main armament of nine 460 mm naval guns, mounted in three triple-gun turrets—each of which weighed more than a 1930s-era destroyer. The designs were quickly approved by the Japanese Naval high command, over the objections of naval aviators, who argued for the construction of aircraft carriers rather than battleships. In all, five Yamato-class battleships were planned.