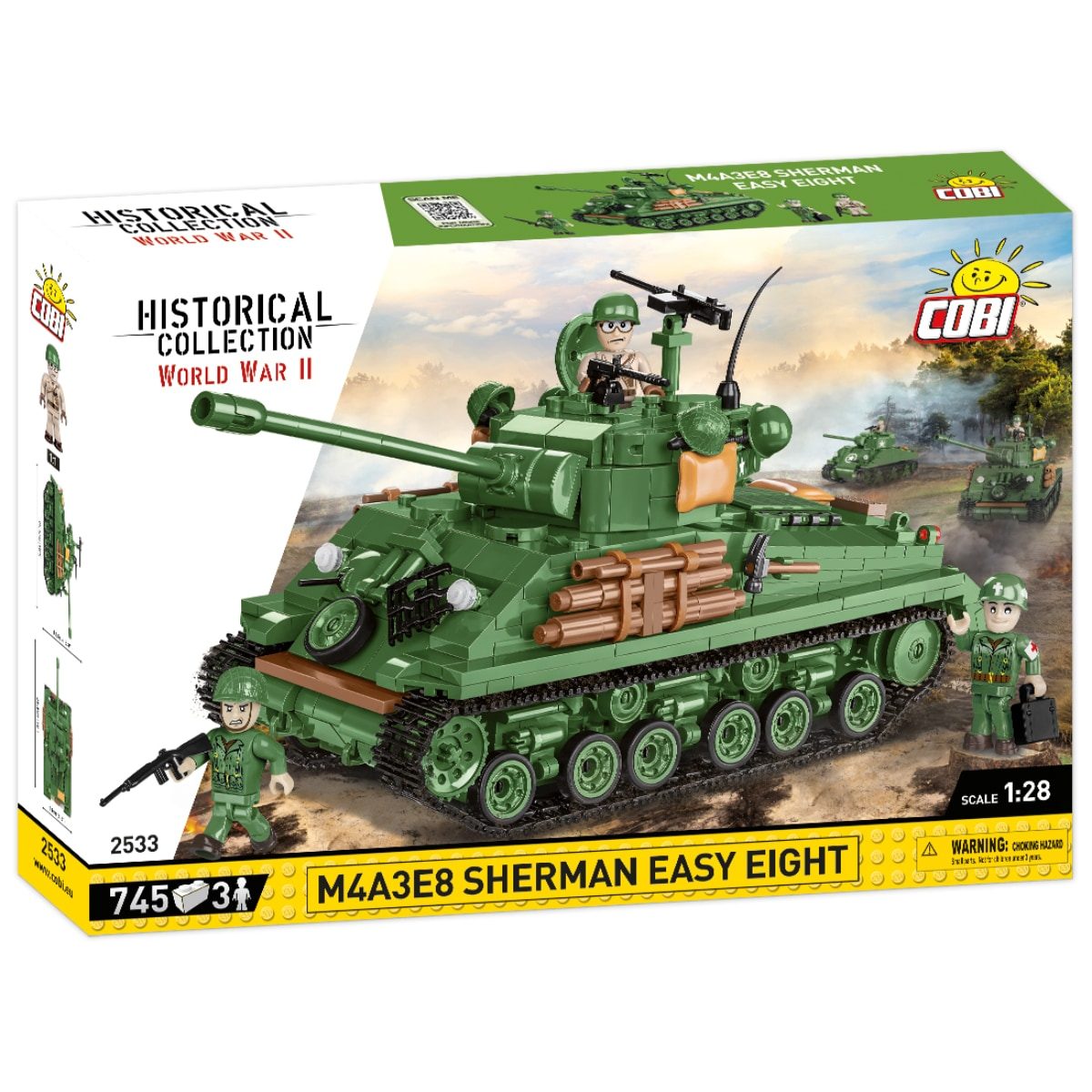 The COBI Sherman Easy Eight Tank Set features 725 highly detailed brick parts and colorful, easy to read detailed instructions.  The COBI M4A3E8 Sherman Easy 8 Tank parts all work with Lego and you will be impressed the great quality and detail of this Cobi brick set.  The Set is Cobi’s Version of the Easy company Sherman M4A3E8 Tanks from the movie Fury.

The COBI Sherman Easy Eight Tank Set features 720 highly detailed brick parts and colorful, easy to read detailed instructions.  The COBI M4A3E8 Sherman Easy Eight parts all work with Lego and you will be impressed with the quality and detail of this Cobi brick set.

FYI, per our experience, this product is approaching the end of its availability (unconfirmed) There is however a new Sherman version here.

Military brick collectors will get hours of enjoyment from this COBI Sherman Easy Eight Tank Set.  Whether you are buying to display or play, Cobi Brick sets will not disappoint.  Ships quickly from Billings, MT USA with tracking number.

The Sherman Easy 8 was upgraded with wide track horizontal volute spring suspension (HVSS) and fitted with the 76mm M1 cannon.

The wide array of special duties that a tank could be used for were just being explored by armies around the world in the early 1940s. Theories of what vehicles were supposed to be engaging enemy tanks changed as vehicles like the Sherman often found themselves up against enemy armor, and consequently some of the most important initial changes centered around upgunning the basic vehicle. Improving the vehicles mobility, protection, and creating specific variants for infantry support roles soon followed. Similar modification of the main armament would be done by the British, who received a number of Shermans during the course of the war. Turning earlier variants of the Sherman into Armored personnel carriers (“Kangaroos”) was also common, as was turning them into armored recovery vehicles.

More radical variants followed, first with experiments with flotation screens in preparation for the invasion of Europe by Allied forces in 1944, and later by the addition of rocket launching equipment mounted on the turret. Extensive work on creating mine clearance devices to be attached to Shermans or out of Shermans in some fashion was also conducted up until the end of the Second World War.

After the end of the Second World War, large numbers of surplus Shermans were supplied to other nations, but primarily to South America and the Middle East. Israel became the largest post-war user of Sherman tanks, conducting extensive modifications to keep them in front line service right up into the early 1970s as tanks, mobile artillery pieces, armored ambulances and more. Many saw action in the 1973 October War. Similar modifications and purchases of Israeli-modified Shermans were done in South America where they served on as the last fighting Shermans right up until 1989.