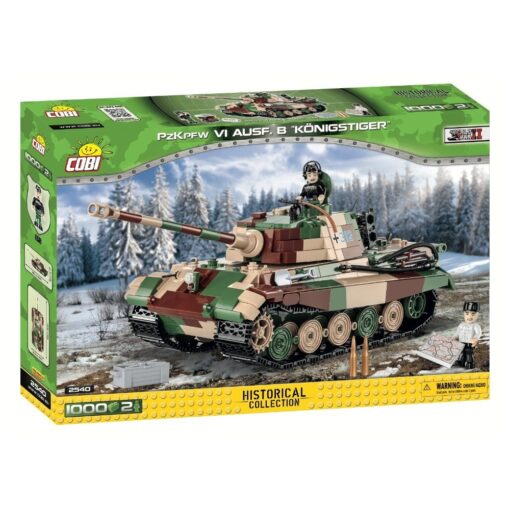 The COBI King Tiger PzKpfw VI Set features 1000 highly detailed brick parts and colorful, easy to read detailed instructions.  The COBI PzKpfw VI King Tiger Tank Set parts all work perfectly with LEGO and you will be impressed with LEGO quality of COBI sets.  COBI Sets differ in that they offer many more pieces and the majority of the parts are unique to COBI.  FREE Shipping on orders over $50! Ships fast with tracking number from our Montana USA home business. Also consider the new Tiger ! AUSF E here.

The COBI King Tiger PzKpfw VI Set features 1000  highly detailed brick parts and colorful, easy to read detailed instructions.  The COBI Konigstiger 2540  parts all work perfectly with LEGO and you will be impressed with LEGO quality of COBI sets.  COBI Sets differ in that they offer many more pieces and the majority of the parts are unique to COBI.  You can learn more about the similarities and differences between COBI and LEGO here.

The new COBI King Tiger VI should include 2 figures and all the markings are pad printed so stickers are not necessary. This is a new COBI Königstiger 2540 set and should not be confused with he prior COBI Tiger II set here.  The COBI King Tiger II will have some very detailed parts including new, more realistic side skirting parts.  There are also numerous accessories much like their upcoming Sherman Easy eight set.  This is an encouraging trend that we are seeing in new COBI Tank sets and we cannot wait to see how this new COBI King Tiger II turns out once we have more than just digital renders.  We believe the set will be available something this fall.

Both collectors and military bricks enthusiasts will get hours of enjoyment from this COBI King Tiger PzKpfw VI Set set however due to the complex nature of COBI sets and the detail we are seeing in the images, it may be more appropriate for children and collectors over the age of 10.  Whether you are buying to display or play, Cobi Brick sets will not disappoint.  Ships quickly from Billings, MT USA with tracking number.

The Tiger II is a German heavy tank of the Second World War. The final official German designation was Panzerkampfwagen Tiger Ausf. B, often shortened to Tiger B. The ordnance inventory designation was Sd.Kfz. 182. It is also known under the informal name Königstiger  (the German name for the Bengal tiger), often translated literally as Royal Tiger, or somewhat incorrectly as King Tiger by Allied soldiers

The Tiger II was the successor to the Tiger I, combining the latter’s thick armour with the armour sloping used on the Panther medium tank. The tank weighed almost 70 tonnes, and was protected by 100 to 185 mm (3.9 to 7.3 in) of armour to the front.  It was armed with the long barrelled 8.8 cm KwK 43 L/71 anti-tank cannon.  The chassis was also the basis for the Jagdtiger turretless Jagdpanzer anti-tank vehicle.[11]

You can read all about the real tank that inspired the COBI King Tiger PzKpfw VI Set here at Wikipedia.