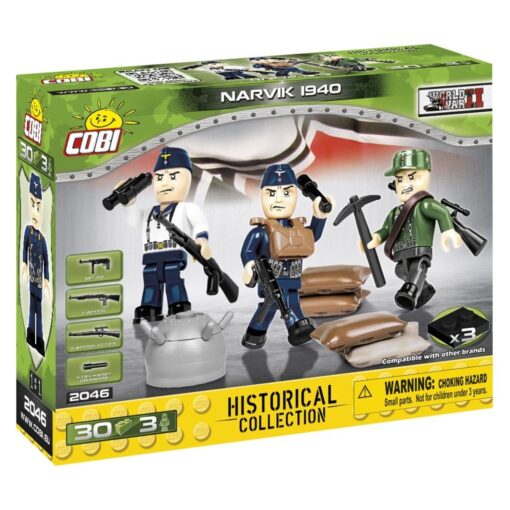 The COBI Narvik 1940 Figure Set (2046) features 30 highly detailed brick parts and colorful, easy to read detailed instructions.  The COBI Narvik 1940 Figure Set parts all work perfectly with LEGO and you will be impressed with LEGO quality of COBI sets.  FREE Shipping on orders over $50! Ships fast with tracking number from our Montana USA home business.

The COBI Narvik 1940 Figure Set (2046) features 30 highly detailed brick parts and colorful, easy to read detailed instructions.  The COBI Narvik 1940 Figure Set parts all work perfectly with LEGO and you will be impressed with the quality of COBI sets.  COBI Sets differ in that they offer many more pieces and the majority of the parts are unique to COBI.  You can learn more about the similarities and differences between COBI and LEGO here.

The COBI 2046 set includes 3 figures and all the markings are pad printed so stickers are not necessary.

Both children and adults will get hours of enjoyment from this COBI Narvik 1940 Figure Set (2046) .  Whether you are buying to display or play, Cobi Brick sets will not disappoint.  Ships quickly from Billings, MT USA with tracking number.

The Battles of Narvik were fought from 9 April to 8 June 1940 as a naval battle in the Ofotfjord and as a land battle in the mountains surrounding the north Norwegian city of Narvik as part of the Norwegian Campaign of the Second World War.

The two naval battles in the Ofotfjord on 10 April and 13 April were fought between the British Royal Navy and Nazi Germany’s Kriegsmarine, while the two-month land campaign was fought between Norwegian, French, British, and Polish troops against German mountain troops, shipwrecked Kriegsmarine sailors and German paratroopers (Fallschirmjäger) from the 7th Air Division. Although defeated at sea off Narvik, losing control of the town of Narvik and being pushed back towards the Swedish border, the Germans eventually prevailed because of the Allied evacuation from Norway in June 1940 following the Battle of France.

Narvik provided an ice-free harbour in the North Atlantic for iron ore transported by the railway from Kiruna in Sweden. Both sides in the war had an interest in securing this iron supply for themselves and denying it to the enemy, setting the stage for one of the biggest battles since the Invasion of Poland.

Prior to the German invasion, British forces had considered Narvik as a possible landing point for an expedition to help Finland in the Winter War. Such an expedition also had the potential of taking control of the Swedish mines and opening up the Baltic for the Allies. French politicians were also eager to start a second front as far away from France as possible.

Learn more about the battles that took place at Narvick, Norway here at wikipedia.