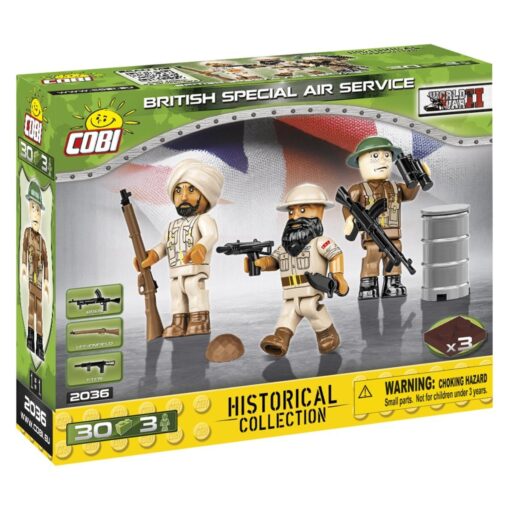 The COBI British SAS Figure Set (2036) features 30 highly detailed brick parts and colorful, easy to read detailed instructions.  The COBI SAS Figure Set (2036) parts all work perfectly with LEGO and you will be impressed with the quality of COBI sets.  COBI Sets differ in that they offer many more pieces and the majority of the parts are unique to COBI.  You can learn more about the similarities and differences between COBI and LEGO here.

The COBI (2036) Set includes 3 figures and all the markings are pad printed so stickers are not necessary.

Both adults and military brick enthusiasts will get hours of enjoyment from this COBI British SAS Figure Set (2036) .  Whether you are buying to display or play, Cobi Brick sets will not disappoint.  Ships quickly from Billings, MT USA with tracking number.

The Special Air Service was a unit of the British Army during the Second World War that was formed in July 1941 by David Stirling and originally called “L” Detachment, Special Air Service Brigade—the “L” designation and Air Service name being a tie-in to a British disinformation campaign, trying to deceive the Axis into thinking there was a paratrooper regiment with numerous units operating in the area (the real SAS would “prove” to the Axis that the fake one existed).  It was conceived as a commando force to operate behind enemy lines in the North African Campaign and initially consisted of five officers and 60 other ranks. Its first mission, in November 1941, was a parachute drop in support of the Operation Crusader offensive. Due to German resistance and adverse weather conditions, the mission was a disaster; 22 men, a third of the unit, were killed or captured.  Its second mission was a major success. Transported by the Long Range Desert Group, it attacked three airfields in Libya, destroying 60 aircraft with the loss of 2 men and 3 jeeps. In September 1942, it was renamed 1st SAS, consisting at that time of four British squadrons, one Free French, one Greek, and the Folboat Section.

By Keating (Capt) No 1 Army Film & Photographic Unit – This is photograph E 21337 from the collections of the Imperial War Museums (collection no. 4700-32), Public Domain, https://commons.wikimedia.org/w/index.php?curid=1460661

On January 1943, Colonel Stirling was captured in Tunisia and Paddy Mayne replaced him as commander. In April 1943, the 1st SAS was reorganised into the Special Raiding Squadron under Mayne’s command and the Special Boat Squadron was placed under the command of George Jellicoe The Special Raiding Squadron fought in Sicily and Italy along with the 2nd SAS, which had been formed in North Africa in 1943 in part by the renaming of the Small Scale Raiding Force.  The Special Boat Squadron fought in the Aegean Islands and Dodecanese until the end of the war. In 1944 the SAS Brigade was formed from the British 1st and 2nd SAS, the French 3rd and 4th SAS and the Belgian 5th SAS.  It was tasked with parachute operations behind the German lines in France  and carried out operations supporting the Allied advance through France, (Operations Houndsworth, Bulbasket, Loyton and Wallace-Hardy) Belgium, the Netherlands (Operation Pegasus), and eventually into Germany (Operation Archway).  As a result of Hitler’s issuing of the Commando Order on 18 October 1942, the members of the unit faced the additional danger that they would be summarily executed if captured by the Germans. In July 1944, following Operation Bulbasket, 34 captured SAS commandos were summarily executed by the Germans. In October 1944, in the aftermath of Operation Loyton another 31 captured SAS commandos were summarily executed by the Germans.

To learn more about the real unit that inspired the COBI British SAS Figure Set (2036) read more here on wikipedia.