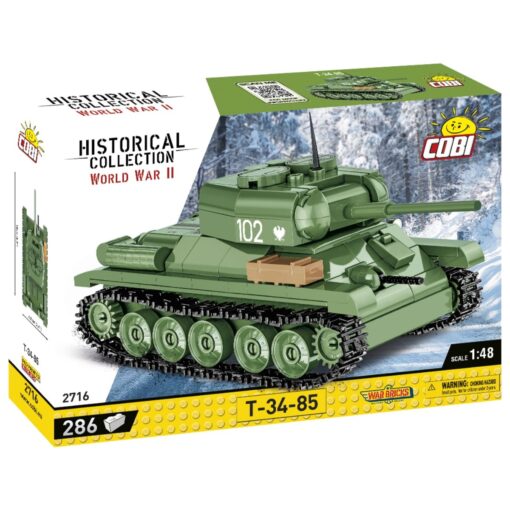 The COBI 1:48 Scale T34 Tank (2716) features 286 highly detailed brick parts and colorful, easy to read detailed instructions.  The COBI soviet tank Set parts all work perfectly with LEGO and you will be impressed with LEGO quality of COBI sets.  FREE Shipping on orders over $50! Ships fast with tracking number from our Montana USA home business.

The COBI 1:48 Scale T34 Tank (2716) features 286 highly detailed brick parts and colorful, easy to read detailed instructions.  The COBI 1:48 T34 Tank (2702) Set parts all work perfectly with LEGO and you will be impressed with the quality of COBI sets.  COBI Sets differ in that they offer many more pieces and the majority of the parts are unique to COBI.
You can learn more about the similarities and differences between COBI and LEGO here.

We also have prior versions available at a discount via the drop down (when available).

The COBI COBI 1:48 Scale T34 Tank all the markings are pad printed so stickers are not necessary.

Both adults and brick enthusiasts of all ages will get hours of enjoyment from this COBI 1:48 Scale T34 Tank (2702) .  Whether you are buying to display or play, Cobi Brick sets will not disappoint.  Ships quickly from Billings, MT USA with tracking number.

The T-34, a Soviet medium tank, had a profound and lasting effect on the field of tank design. At its introduction in 1940, the T-34 possessed an unprecedented combination of firepower, mobility, protection and ruggedness. Its 76.2 mm (3 in) high-velocity tank gun provided a substantial increase in firepower over any of its contemporaries while its well-sloped armour was difficult to penetrate by most contemporary anti-tank weapons. The 60 degree sloped armor and Christie suspension were inherited from the design of American Walter Christie’s M1928 tank, versions of which were sold turret-less to the Red Army and documented as “farm tractors”, after being rejected by the U.S. Army.  When it was first encountered in 1941, German general Paul Ludwig Ewald von Kleist called it “the finest tank in the world” and Heinz Guderian affirmed the T-34’s “vast superiority” over existing German armour of the period. he T-34 was the mainstay of Soviet armoured forces throughout the Second World War. Its general specifications remained nearly unchanged until late 1944, when it received a major upgrade to firepower and ergonomics with the introduction of the greatly improved T-34/85 variant. Despite this, its production method had been continuously refined to meet the constantly increasing needs of the Eastern Front, making the T-34 quicker and cheaper to produce. Soviet industry would eventually produce over 80,000 T-34s of all variants, allowing steadily greater numbers to be fielded while the war progressed despite the loss of tens of thousands of them in combat against the German Wehrmacht.