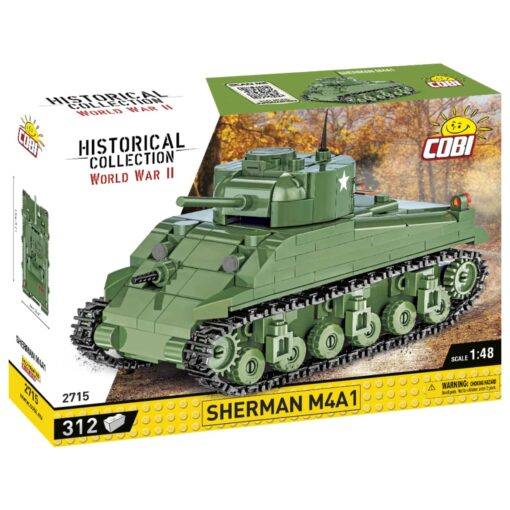 The COBI Sherman M4A1 1:48 Set (2715) features 300 highly detailed brick parts and colorful, easy to read detailed instructions.  The COBI Sherman M4A1 Set parts all work perfectly with LEGO and you will be impressed with LEGO quality of COBI sets.  FREE Shipping on orders over $50! Ships fast with tracking number from our Montana USA home business.

The COBI Sherman M4A1 1/48 Set (2715) features 312 highly detailed brick parts and colorful, easy to read detailed instructions.  The COBI Sherman M4A1 Set parts all work perfectly with LEGO and you will be impressed with the quality of COBI sets.  COBI Sets differ in that they offer many more pieces and the majority of the parts are unique to COBI.  You can learn more about the similarities and differences between COBI and LEGO here.

The COBI Sherman M4A1’s markings are pad printed so stickers are not necessary.

Both children and adults will get hours of enjoyment from this COBI Sherman M4A1 1:48 Set (2715) .  Whether you are buying to display or play, Cobi Brick sets will not disappoint.  Ships quickly from Billings, MT USA with tracking number.

The M4 Sherman, officially Medium Tank, M4, was the most widely used medium tank by the United States and Western Allies in World War II. The M4 Sherman proved to be reliable, relatively cheap to produce, and available in great numbers. It was also the basis of several successful tank destroyers, such as the M10, 17pdr SP Achilles and M36B1. Tens of thousands were distributed through the Lend-Lease program to the British Commonwealth and Soviet Union. The tank was named by the British for the American Civil War general William Tecumseh Sherman.

The M4 Sherman evolved from the M3 Medium Tank, which – for speed of development – had its main armament in a side sponson mount. The M4 retained much of the previous mechanical design, but moved the main 75 mm gun into a fully traversing central turret. One feature, a one-axis gyrostabilizer, was not precise enough to allow firing when moving but did help keep the reticle on target, so that when the tank did stop to fire, the gun would be aimed in roughly the right direction. The designers stressed mechanical reliability, ease of production and maintenance, durability, standardization of parts and ammunition in a limited number of variants, and moderate size and weight (its width and weight were designed to conform with the War Department restrictions at the time that aimed to ease shipping problems and ensure armored vehicles would be compatible with existing bridging equipment.). These factors, combined with the Sherman’s then-superior armor and armament, outclassed German lightand medium tanks fielded in 1939–42. The M4 went on to be produced in large numbers, being the most produced tank in American history: during World War II. The Sherman spearheaded many offensives by the Western Allies after 1942.