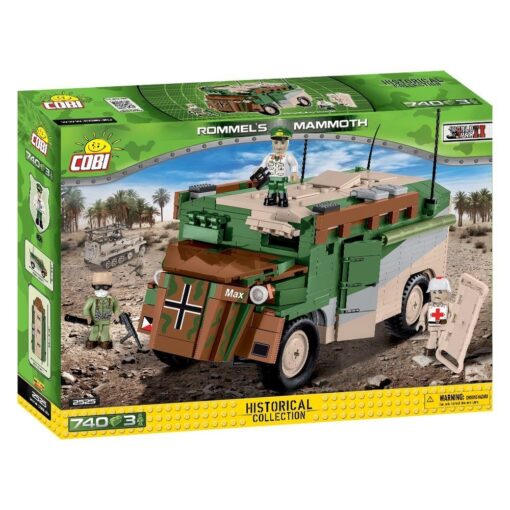 The COBI ROMMEL’S Mammut Set features 735 highly detailed brick parts and colorful, easy to read detailed instructions.  The COBI Mammut parts all work with LEGO and you will be impressed with the COBI Brick quality.  Ships quickly from Billings, MT USA with tracking number.

The COBI ROMMEL’S Mammut Set features 735 highly detailed brick parts and colorful, easy to read detailed instructions.  The COBI Mammut parts all work with LEGO and you will be impressed with the COBI Brick quality.

The COBI ROMMEL Mammut Set includes 3 figures (including Rommel) and all the markings are pad printed so stickers are not necessary.

Both children and adults will get hours of enjoyment from this COBI Rommol’s Marmut set.  Whether you are buying to display or play, Cobi Brick sets will not disappoint.  Ships quickly from Billings, MT USA with tracking number.

During the Second World War, the United Kingdom was the only country to develop and widely employ purpose-built armoured command vehicles. Those were essentially armoured buses based on truck chassis.

The most common ACV of the British Army was the AEC 4×4 ACV. The vehicle, based on AEC Matador chassis, entered production in 1941. A total of about 415 units were built. The vehicle was used for the first time in the North African Campaign and remained in service until the end of the war. Big and comfortable, it was nicknamed Dorchester by the troops, after the luxury hotel in London. Three ACVs of this type were captured by the German Afrika Korps. Two of them, named “Max” and “Moritz”, were employed by Rommel and his staff throughout the campaign.

Apparently Rommel AKA the “Desert Fox” Used the SD KFZ 250 Radio Half track as well during the Tunisia campaign in North Africa.