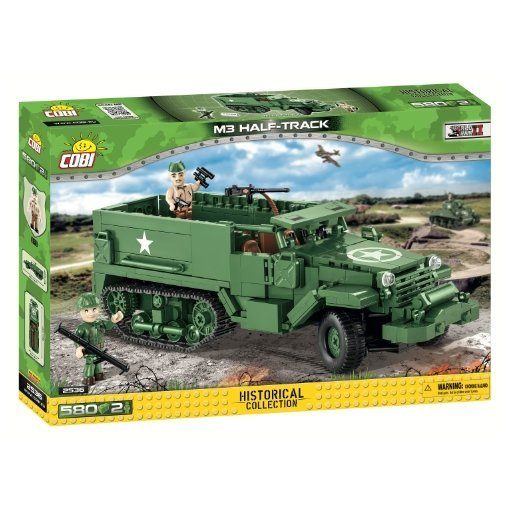 The COBI M3 Armored Half-Track Set features 580 highly detailed brick parts and colorful, easy to read detailed instructions.  The COBI M3 Halftrack parts all work perfectly with LEGO and you will be impressed with LEGO quality of COBI sets.   FREE Shipping on orders over $50! Ships fast with tracking number from our Montana USA home business.

The COBI M3 Half – Track Set features 580 highly detailed brick parts and colorful, easy to read detailed instructions.  The COBI Half Track parts all work perfectly with LEGO and you will be impressed with LEGO quality of COBI sets.  COBI Sets differ in that they offer many more pieces and the majority of the parts are unique to COBI.  You can learn more about the similarities and differences between COBI and LEGO here.

The COBI M3 Armored Half-Track includes 2 figures and all the markings are pad printed so stickers are not necessary. This set works well with the COBI M3 Gun Motor Carriage Set

Both Cobi collectors and brick enthusiast will get hours of enjoyment from this COBI M3 Half Track Set.  Whether you are buying to display or play, Cobi Brick sets will not disappoint.  Ships quickly from Billings, MT USA with tracking number.

The M3 half-track was an American armored personnel carrier half-track widely used by the Allies during World War II and in the Cold War. Derived from the M2 half-track car, the M3 was extensively produced, with about 15,000 standard M3s and more than 38,000 variant units manufactured.

The M3 was extensively modified with several dozen variant designs produced for different purposes. During World War II, the M3 and its variants were supplied to the U.S. Army and Marines, as well as British Commonwealth and Soviet Red Army forces, serving on all major fronts throughout the war. The M3 and its variants were produced by many manufacturers including Diamond T, White Motor Company and Autocar and were designed for a wide variety of uses, such as a self-propelled anti-aircraft weapon or self-propelled artillery. Although initially unpopular due to its lack of significant armor or a roof to protect the crew from shrapnel, it was used by most of the Allies during the war.

In the Cold War era, the vehicle was used by a variety of state and non-state operators in conflicts in South America, the Middle East, Africa, and Asia, remaining in service until as late as the mid-1990s. In Mexico they are still in use as of 2019.