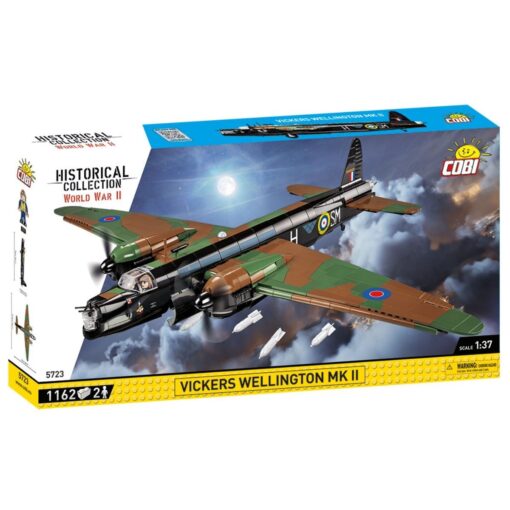 The COBI Vickers Wellington MK II (5723) is a high quality, made in Europe, brick set that is fully compatible with LEGO. The COBI Vickers Wellington (5723) features a unique assortment of lego compatible parts and easy to read detailed instructions in english. Regardless if you are an experienced brick collector or new to military bricks, COBI bricks will become your go to for highly detailed display and play military and historical bricks.

The COBI Vickers Wellington MK II (5723) is a high quality, made in Europe, brick set that is fully compatible with LEGO. The COBI Vickers Wellington MK II  features a unique assortment of Lego compatible parts and easy to read detailed instructions in english. Regardless if you are an experienced brick collector or new to military bricks, COBI bricks will become your go to for highly detailed display and play military and historical bricks.

The COBI Vickers Wellington’s parts are all pad printed so no messy decals are necessary. Just make sure you place the marked parts in the appropriate place per the detailed COBI instruction booklet so that the desired appearance is achieved.

How many parts does the COBI Vickers Wellington MK II (5723) have?

Both adults and brick collectors of all ages will get hours of enjoyment from this COBI Vickers Wellington MK II (5723).  Whether you are buying to display or play, Cobi Brick sets will not disappoint. Ships quickly from Billings, MT USA with tracking number.

The Vickers Wellington was a British twin engined, long range medium bomber. It was designed during the mid-1930s at Brooklands in Weybridge, Surrey. Led by Vickers Armstrong’s chief designer Rex Pierson; a key feature of the aircraft is its geodetic airframe fuselage structure, which was principally designed by Barnes Wallis. Development had been started in response to Air MinistrySpecification B.9/32, issued in the middle of 1932, for a bomber for the Royal Air Force.

This specification called for a twin-engined day bomber capable of delivering higher performance than any previous design. During the development process, performance requirements such as for the tare weight changed substantially, and the engine used was not the one originally intended.

The Wellington was used as a night bomber in the early years of the Second World War, performing as one of the principal bombers used by Bomber Command. During 1943, it started to be superseded as a bomber by the larger four-engined “heavies” such as the Avro Lancaster. The Wellington continued to serve throughout the war in other duties, particularly as an anti-submarine aircraft.

It holds the distinction of having been the only British bomber that was produced for the duration of the war, and of having been produced in a greater quantity than any other British-built bomber. The Wellington remained as first-line equipment when the war ended, although it had been increasingly relegated to secondary roles. The Wellington was one of two bombers named after Arthur Wellesley, 1st Duke of Wellington, the other being the Vickers Wellesley.

A larger heavy bomber aircraft designed to Specification B.1/35, the Vickers Warwick, was developed in parallel with the Wellington; the two aircraft shared around 85% of their structural components. Many elements of the Wellington were also re-used in a civil derivative, the Vickers VC.1 Viking.

Cobi brick sets are compatible with all other top quality brick brands.  Cobi Bricks are made in Poland and the sets are full of unique parts made for adding realism to each set.  These sets may require more attention to build due to the numerous parts and “layered” approach that Cobi Brick sets use.  Cobi Brick sets come with super detailed and easy to use colored instructions.

Are COBI Sets appropriate for children?

COBI Brick Sets are great for children and adults but you should be aware that younger children will need help with larger sets due to the huge number of parts and layered building style. We always encourage trying out one of the 1:48 scale tank sets to start out as they are smaller and are a great way to test the legendary COBI Brick quality.