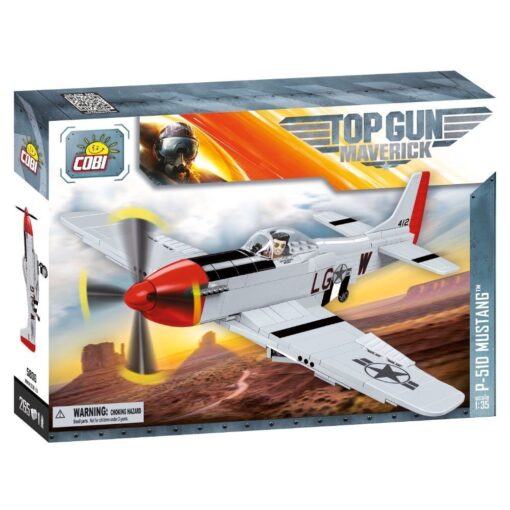 The COBI Top Gun P51D Mustang Set features 265 highly detailed brick parts and colorful, easy to read detailed instructions.  The COBI Top Gun P51D Set parts all work perfectly with LEGO and you will be impressed with LEGO quality of COBI sets.  COBI Sets differ in that they offer many more pieces and the majority of the parts are unique to COBI.  You can learn more about the similarities and differences between COBI and LEGO here.

The COBI Top Gun P51D Mustang Set includes 1 figure and all the markings are pad printed so stickers are not necessary. This COBI top Gun Maverick set set is specifically licensed by the TOP Gun Maverick franchise and it will be available fall 2020.

The Mustang was designed to use the Allison V-1710 engine, which had limited high-altitude performance in its earlier variants. The aircraft was first flown operationally by the Royal Air Force (RAF) as a tactical-reconnaissance aircraft and fighter-bomber (Mustang Mk I). Replacing the Allison with a Rolls-Royce Merlin resulted in the P-51B/C (Mustang Mk III) model and transformed the aircraft’s performance at altitudes above 15,000 ft (4,600 m) (without sacrificing range),  allowing it to compete with the Luftwaffe’s fighters. The definitive version, the P-51D, was powered by the Packard V-1650-7, a license-built version of the two-speed two-stage-supercharged Merlin 66, and was armed with six .50 caliber (12.7 mm) AN/M2 Browning machine guns.

At the start of the Korean War, the Mustang, by then redesignated F-51, was the main fighter of the United Nations until jet fighters, including North American’s F-86, took over this role; the Mustang then became a specialized fighter-bomber. Despite the advent of jet fighters, the Mustang remained in service with some air forces until the early 1980s. After the Korean War, Mustangs became popular civilian warbirds and air racing aircraft.

You can read more about the real aircraft that inspired the COBI Top Gun P51D Mustang Set here at Wikipedia.