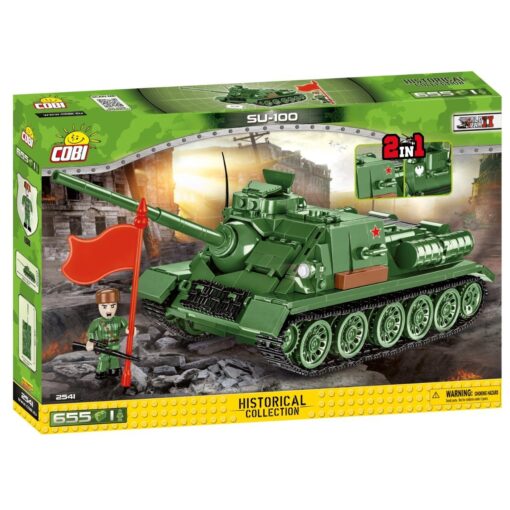 The COBI SU-100 Tank Destroyer (2541) features 655 highly detailed brick parts and colorful, easy to read detailed instructions.  The COBI SU-100 2in1 (2541) parts all work perfectly with LEGO and you will be impressed with the quality of COBI sets.

The COBI SU-100 Tank Destroyer (2541) features 655 highly detailed brick parts and colorful, easy to read detailed instructions.  The COBI SU-100 2in1 (2541) parts all work perfectly with LEGO and you will be impressed with the quality of COBI sets.  COBI Sets differ in that they offer many more pieces and the majority of the parts are unique to COBI.  You can learn more about the similarities and differences between COBI and LEGO here.

The SU-100 (Samokhodnaya Ustanovka 100) was a Soviet tank destroyer armed with a 100 mm anti-tank gun in a casemate superstructure. It was used extensively during the last year of World War IIand saw service for many years afterwards with the armies of Soviet allies around the world
The SU-100 saw extensive service during the last year of the war. It was used en masse in Hungary in March 1945, when Soviet forces defeated the German Operation Frühlingserwachen offensive at Lake Balaton. By July 1945, 2,335 SU-100s had been built.

The vehicle remained in service with the Red Army well after the war; production continued in the Soviet Union until 1947 and into the 1950s in Czechoslovakia. It was withdrawn from Soviet service in 1967 but many vehicles were transferred to reserve stocks. Some exist to this day in the Russian Army holding facilities.
Many Warsaw Pact countries also used the SU-100, as did Soviet allies such as Egypt, Angola and Cuba. A few SU-100 were delivered to Yugoslavia after the war, under the designation M-44. The SU-100 saw service in the fighting that accompanied the 1956 Suez Crisis, in which the Egyptians used SU-100s against Israel’s M4 Sherman tanks. The vehicle was also utilized in the 1967 Six-Day War and the 1973 Yom Kippur War. It was modified slightly to adapt it to the sandy conditions of the Middle East, thus creating the SU-100M variant. Exported SU-100s continued in service until the 1970s, and in some countries, even later. Yugoslavs used them during the civil war; however, due to lack of spare parts they were quickly retired, despite their satisfactory performance. The SU-100 remains in use by the Vietnam People’s Army and the Korean People’s Army Ground Force.
SU-100s entered service with the People’s Liberation Army (PLA) of China after 1 December 1950 when Soviet forces left Dalian. The armaments in Dalian were sold to China, including 99 SU-100s, 18 IS-2 heavy tanks, and 224 T-34s, with which PLA formed its 1st Mechanised Division.

In April 2015, a SU-100 self-propelled gun was photographed being used in Yemen as part of the ongoing conflict Video evidence uploaded to YouTube in November 2016 showed an apparent SU-100 being knocked out by an anti-tank guided missile in Yemen.

For more information regarding the real tank that inspired the Soviet SU-100 Tank Destroyer click here.