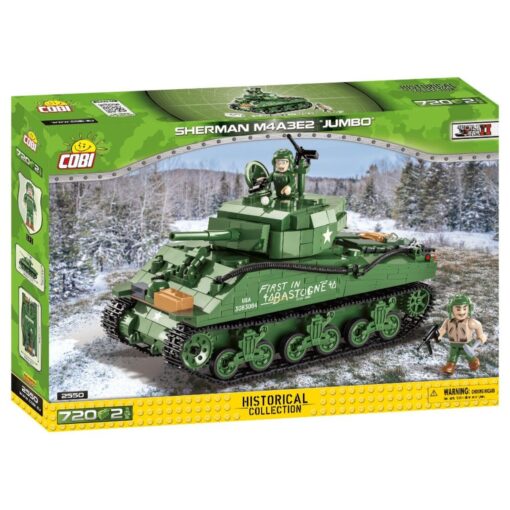 The COBI Sherman M4A3E2 Jumbo Set (2550) features 715 highly detailed brick parts and colorful, easy to read detailed instructions.  The COBI Sherman M4A3E2 Jumbo Set parts all work perfectly with LEGO and you will be impressed with the quality of COBI sets.  COBI Sets differ in that they offer many more pieces and the majority of the parts are unique to COBI.  You can learn more about the similarities and differences between COBI and LEGO here.

The COBI Sherman M4A3E2 Jumbo  includes 2 figures and all the markings are pad printed so stickers are not necessary.

Both collectors and brick enthusiasts will get value and hours of enjoyment from this COBI Sherman M4A3E2 Jumbo Set (2550) .  Whether you are buying to display or play, Cobi Brick sets will not disappoint.  Ships quickly from Billings, MT USA with tracking number.

The M4 Sherman, officially Medium Tank, M4, was the most widely used medium tank by the United States and Western Allies in World War II. The M4 Sherman proved to be reliable, relatively cheap to produce, and available in great numbers. It was also the basis of several successful tank destroyers, such as the M10, Achilles and M36. Tens of thousands were distributed through the Lend-Leaseprogram to the British Commonwealth and Soviet Union. The tank was named by the British for the American Civil War general William Tecumseh Sherman.

From May to July 1944, the Army accepted a limited run of 254 M4A3E2 Jumbo Shermans, which had very thick hull armor and the 75 mm gun in a new, better- protected T23-style turret, in order to assault fortifications. The M4A3 model was the first to be factory-produced with the horizontal volute spring suspension (HVSS) system with wider tracks to distribute weight, beginning in August 1944. With the smooth ride of the HVSS, it gained the nickname “Easy Eight” from its experimental “E8” designation. The M4 and M4A3 105 mm-armed tanks, as well as the M4A1 and M4A2 76 mm-armed tanks, were also eventually equipped with HVSS. Both the Americans and the British developed a wide array of special attachments for the Sherman, although few saw combat, remaining experimental. Those that saw action included a bulldozer blade, the Duplex Drive system, flamethrowers for Zippo flame tanks, and various rocket launchers such as the T34 Calliope. British variants (DDs and mine flails) formed part of the group of specialized vehicles collectively known as “Hobart’s Funnies” (after Percy Hobart, commander of the 79th Armored Division).