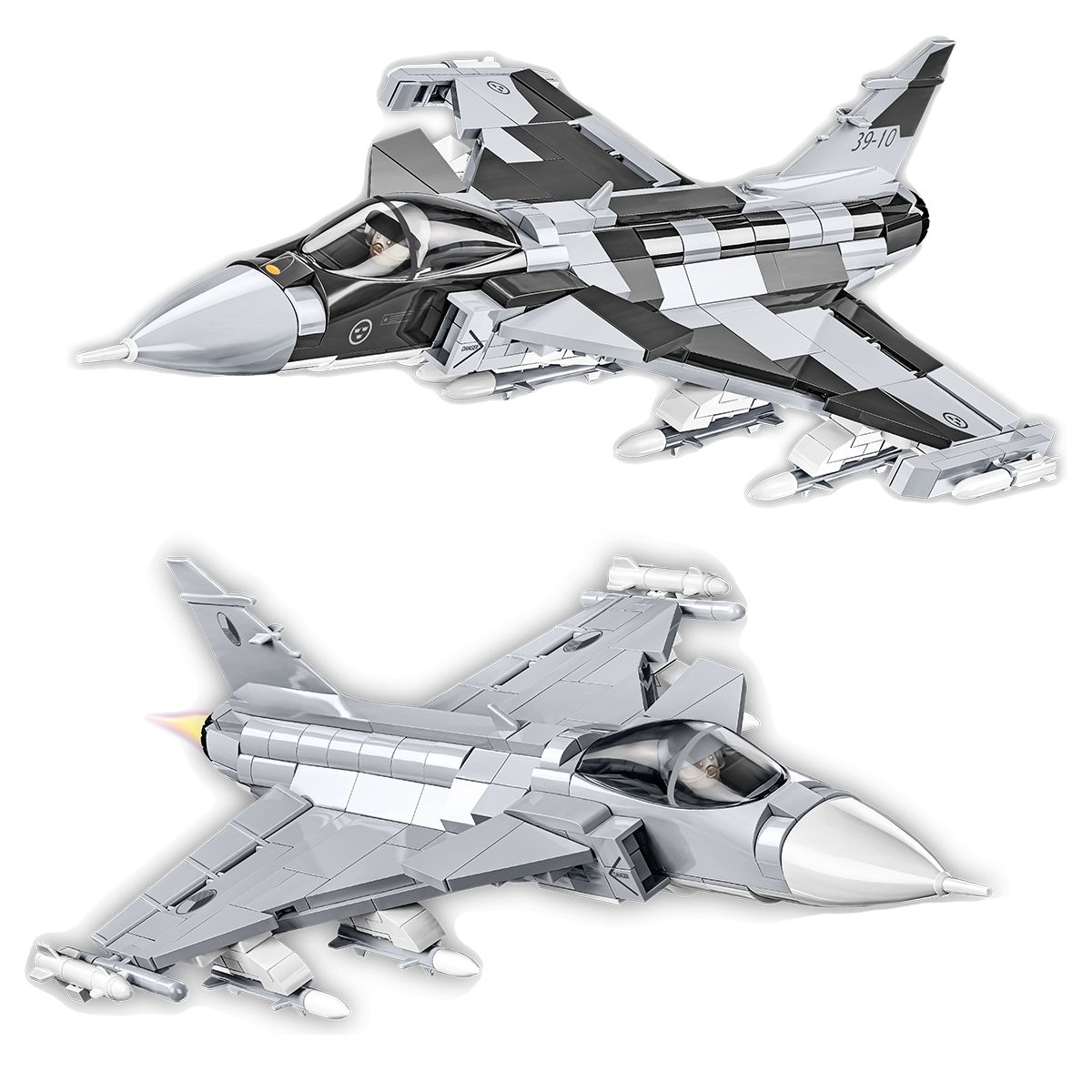 The COBI Saab Jas 39 Gripen E  and C Sets (5820 & 5828) are a high quality, made in Europe, brick sets that are fully compatible with LEGO. The COBI Saab Jas 39 Gripen Sets feature a unique assortment of parts and easy to read detailed instructions in english. Regardless if you are an experienced brick collector or new to military bricks, COBI bricks will become your go to for highly detailed display and play military and historical bricks.

The COBI Saab Jas 39 Gripen Sets parts are all pad printed so no messy decals are necessary. Just make sure you place the marked parts in the appropriate place per the detailed COBI instruction booklet so that the desired appearance is achieved.

How Long is the COBI Jas 39 Gripen Set?

Both adults and brick collectors of all ages will get hours of enjoyment from this COBI Saab Jas 39 Gripen E Set (5820).  Whether you are buying to display or play, Cobi Brick sets will not disappoint.  Ships quickly from Billings, MT USA with tracking number.

The Saab JAS 39 Gripen (IPA: [ˈɡrǐːpɛn]; English: griffin) is a light single-engine multirole fighter aircraft manufactured by the Swedish aerospace and defense company Saab AB. The Gripen has a delta wing and canard configuration with relaxed stability design and fly-by-wire flight controls. Later aircraft are fully NATO interoperable. As of 2020, more than 271 Gripens of all models, A–F, have been built.

In 1979, the Swedish government began development studies for an aircraft capable of fighter, attack, and reconnaissance missions to replace the Saab 35 Draken and 37 Viggen in the Swedish Air Force. A new design from Saab was selected and developed as the JAS 39. The first flight occurred in 1988, with delivery of the first serial production airplane in 1993. It entered service with the Swedish Air Force in 1996. Upgraded variants, featuring more advanced avionics and adaptations for longer mission times, began entering service in 2003.

To market the aircraft internationally, Saab formed partnerships and collaborative efforts with overseas aerospace companies. On the export market, early models of the Gripen achieved moderate success, with sales to nations in Central Europe, South Africa, and Southeast Asia. Bribery was suspected in some of these procurements, but authorities closed the investigation in 2009.

A major redesign of the Gripen series, designated JAS 39E/F Gripen but previously referred to as Gripen NG or Super JAS, began deliveries to the Swedish and Brazilian Air Forces in 2019. The changes from the C-series to E-series include a larger body, a more powerful engine, an increased weapons payload capability, and new cockpit, avionics architecture, and electronic warfare system.