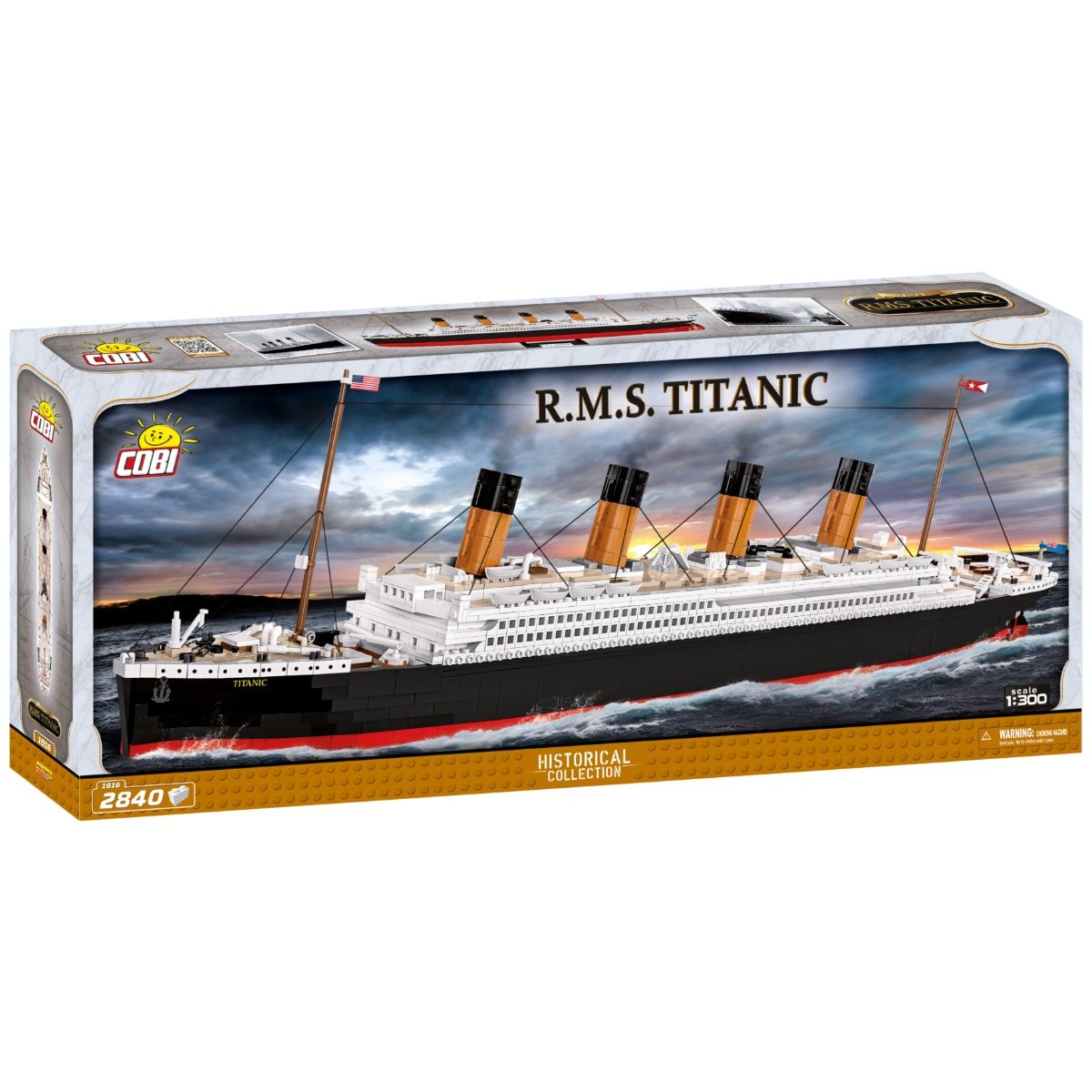 The COBI R.M.S Titanic Set (1916) features 2,840 highly detailed brick parts and colorful, easy to read detailed instructions.  The COBI R.M.S Titanic (1916) parts all work perfectly with LEGO and you will be impressed with LEGO quality of COBI sets.  FREE Shipping on orders over $50! Ships fast with tracking number from our Montana USA home business.

The COBI R.M.S Titanic Set (1916) features 2,840 highly detailed brick parts and colorful, easy to read detailed instructions.  The COBI R.M.S Titanic parts all work perfectly with LEGO and you will be impressed with the quality of COBI sets.  COBI Sets differ in that they offer many more pieces and the majority of the parts are unique to COBI.  You can learn more about the similarities and differences between COBI and LEGO here.

This has traditionally been one of COBI’s most popular set ever and is primarily a detailed display model. This ship will fit in nicely in a den, or on a mantle and is definitely a conversation starter.  The COBI 1916 Titanic set is massive! It is also probably one of the most popular sets in the USA! You may want to also consider the COBI Battleship Bismarck and USS Enterprise CV-6 Sets as well.

The COBI Titanic includes a display stand and all the markings are pad printed so stickers are not necessary.

Both children and adults will get hours of enjoyment from this COBI R.M.S Titanic 1:300 Set (1916).  Whether you are buying to display or play, Cobi Brick sets will not disappoint.  Ships quickly from Billings, MT USA with tracking number.

Also consider the COBI Titanic Set (1914) Which is smaller and geared towards younger builders.

RMS Titanic was a British passenger liner operated by the White Star Line that sank in the North Atlantic Ocean in the early morning hours of 15 April 1912, after striking an iceberg during her maiden voyage from Southampton to New York City. Of the estimated 2,224 passengers and crew aboard, more than 1,500 died, making the sinking one of modern history’s deadliest peacetime commercial marine disasters. RMS Titanic was the largest ship afloat at the time she entered service and was the second of three Olympic-class ocean liners operated by the White Star Line. She was built by the Harland and Wolff shipyard in Belfast. Thomas Andrews, chief naval architect of the shipyard at the time, died in the disaster.

Learn more about the real life ship that inspired the COBI RSM Titanic Here on wikipedia.

Warbricks.com is a family owned Montana small business. We stand behind all our products and want you to know that Cobi Bricks are compatible with other top quality building bricks.  We started Warbricks after we saw how much our own children loved playing with Cobi Tanks and airplanes.  We believe your family and loved ones will love them as well.