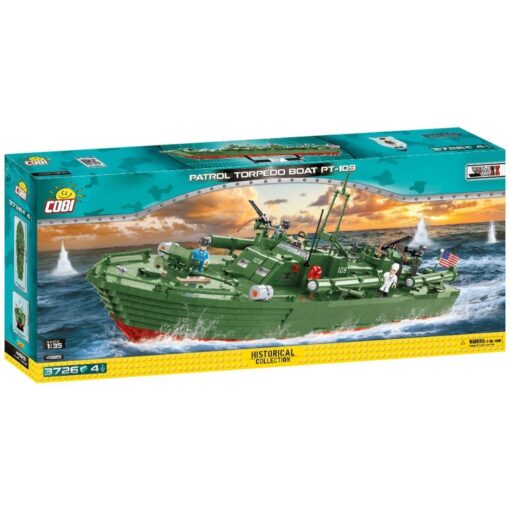 The COBI PT-109 Torpedo Boat Set features 3726 highly detailed brick parts and colorful, easy to read detailed instructions.  The COBI PT109 Set parts all work perfectly with LEGO and you will be impressed with LEGO quality of COBI sets.  FREE Shipping on orders over $50! Ships fast with tracking number from our Montana USA home business.

At 3700 pieces, the COBI PT-109 Torpedo Boat Set (4824) is COBI’s biggest set ever (28.3″ long and 7.9″ wide)! The COBI PT 109 set will be available in two editions, one limited and one standard, with the Limited edition sporting additional crew mini figures. Typically the USA will only see the standard edition which you can pre-order through us when it is about one month away from arriving on US soil.

The COBI PT-109 Torpedo Boat will feature a detailed interior that should impress even the most critical COBI collector! The 1/35 scale set will be very large and is definitely going to require a healthy amount of desk space or an ample shelf. The standard edition will come with 4 figures.

YES IT DOES! We actually tested it and it floats.

As with all COBI sets, the PT-109 Torpedo Boat will come with detailed easy to read instructions is recommended for children 12 years and older.  Younger builders may want to check out the COBI Mark II PBR set here or the COBI RMS Titanic Set here.

How do COBI bricks stack up agains LEGO? We genuinely believe you will be impressed with the quality of COBI bricks.  They are made in the EU from the same materials as LEGO bricks and each COBI set features a ton of very unique, LEGO compatible bricks that you won’t find in any other brand. COBI is not a cheap LEGO knock off but an improvement on the great brand we all grew up to love.  COBI focuses on detailed collectible military sets and that’s what you really want anyways right?  If you are hesitant and would like to try test the COBI quality, be sure to try out one of the COBI 1:48 scale tanks or aircraft as they will provide you with a good representation of the block quality.  You can also read our blog post from 2020 titled “COBI Vs Lego understanding the difference” here.

The COBI PT-109 Torpedo Boat Set parts all work perfectly with LEGO and you will be impressed with the quality of COBI sets.  COBI Sets differ in that they offer many more pieces and the majority of the parts are unique to COBI.  You can learn more about the similarities and differences between COBI and LEGO here.

Both collectors and brick enthusiasts will get hours of enjoyment from this COBI PT-109 Torpedo Boat Set .  Whether you are buying to display or play, Cobi Brick sets will not disappoint.  Ships quickly from Billings, MT USA with tracking number.

The PT-109 was an 80’ Elco PT boat (patrol torpedo boat) last commanded by Lieutenant (junior grade) John F. Kennedy, future United States President, in the Pacific theater during World War II. His actions to save his surviving crew after the sinking of PT-109 made him a war hero. PT-109‘s ramming by a Japanese destroyer contributed to Kennedy’s long-term back problems and required months of hospitalization at Chelsea Naval Hospital. Kennedy’s postwar campaigns for elected office referred often to his service on PT-109.

PT-109 could accommodate a crew of three officers and 14 enlisted men, with the typical crew size between 12 and 14. Fully loaded, it displaced 56 tons.

The Elco boats were the largest PT boats operated by the U.S. Navy during World War II. At 80 feet (24 m) and 40 tons, they had strong wooden hulls, constructed of two layers of 1-inch (2.5 cm) mahogany planking, excellent for speed, but provided very limited protection in combat.