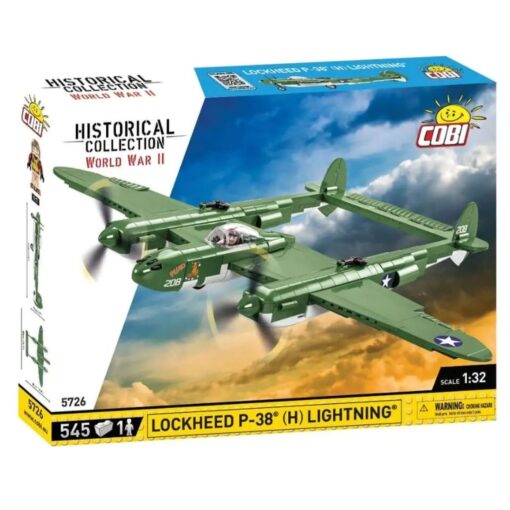 The COBI P38H Lightning Set (5726) is a high quality, made in Europe, brick set that is fully compatible with LEGO. The COBI P38H Lightning features a unique assortment of Lego compatible parts and easy to read detailed instructions in english. Regardless if you are an experienced brick collector or new to military bricks, COBI bricks will become your go to for highly detailed display and play military and historical bricks.

The COBI P38H Lightning Set (5726) is a high quality, made in Europe, brick set that is fully compatible with LEGO. The COBI P38H Lightning features a unique assortment of Lego compatible parts and easy to read detailed instructions in english. Regardless if you are an experienced brick collector or new to military bricks, COBI bricks will become your go to for highly detailed display and play military and historical bricks.

Also check out the new COBI Grumman F4f from the pacific theater here.

The COBI Lockheed P38H Lightning’s parts are all pad printed so no messy decals are necessary. Just make sure you place the marked parts in the appropriate place per the detailed COBI instruction booklet so that the desired appearance is achieved.

How Wide is the COBI Lockheed P38 Lightning Set?

Both adults and brick collectors of all ages will get hours of enjoyment from this COBI P38H Lightning Set (5726) .  Whether you are buying to display or play, Cobi Brick sets will not disappoint.  Ships quickly from Billings, MT USA with tracking number.

The Lockheed P-38 Lightning is a World WarII era American piston engined fighter aircraft. Developed for the United States Army Air Corps, the P-38 had distinctive twin booms and a central nacelle containing the cockpit and armament. Allied propaganda claimed it had been nicknamed the fork-tailed devil by the Luftwaffe and “two planes, one pilot” by the Japanese.  Along with its use as a general fighter, the P-38 was utilized in various aerial combat roles including as a highly effective fighter-bomber, a night fighter, and as a long-range escort fighter when equipped with drop tanks. The P-38 was also used as a bomber-pathfinder, guiding streams of medium and heavy bombers; or even other P-38s, equipped with bombs, to their targets. Used in the aerial reconnaissance role, the P-38 would account for 90 percent of the aerial film captured over Europe.

The P-38 was used most successfully in the Pacific Theater of Operations and the China-Burma-India Theater of Operations as the aircraft of America’s top aces, Richard Bong (40 victories), Thomas McGuire (38 victories) and Charles H. MacDonald (27 victories). In the South West Pacific theater, the P-38 was the primary long-range fighter of United States Army Air Forces until the introduction of large numbers of P-51D Mustangs toward the end of the war.

Unusual for a fighter of this time, the exhaust was muffled by the turbo-superchargers, making the P-38’s operation relatively quiet.  The two turbo-superchargers also provided the P-38 with good high-altitude performance, making it one of the earliest Allied fighters capable of performing at such altitudes.  It was extremely unforgiving and could be mishandled in many ways, but the rate of roll in the early versions was too low for it to excel as a dogfighter.  The P-38 was the only American fighter aircraft in large-scale production throughout American involvement in the war, from Pearl Harbor to Victory over Japan Day.  At the end of the war, orders for 1,887 more were cancelled.

You can read all about the real aircraft that inspired the COBI P38H Lightning Set (5726) here at https://en.wikipedia.org/wiki/Lockheed_P-38_Lightning