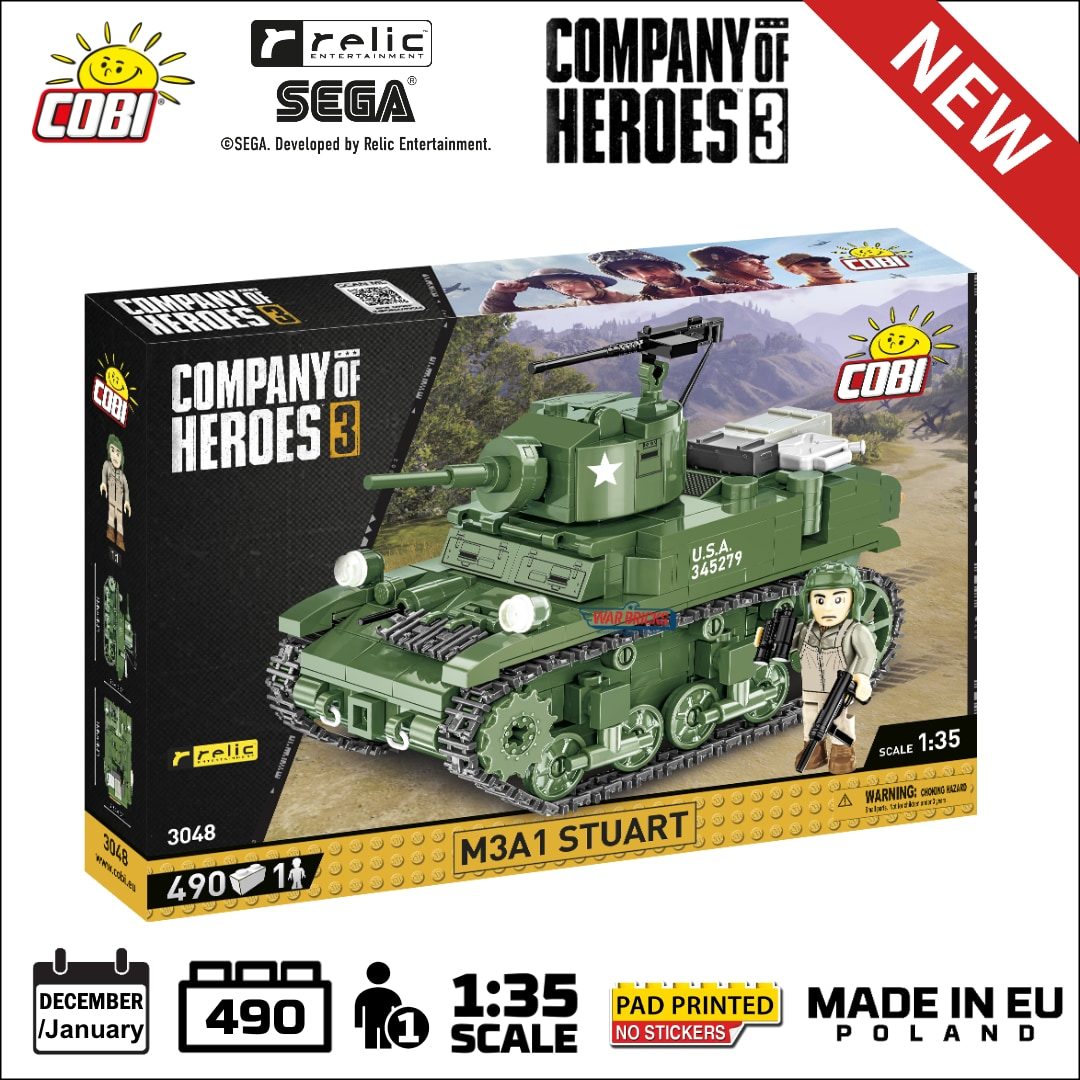 The new COBI M3A1 STUART COH3 Tank (3048) is the latest in the new Company of Heroes 3 official licensed COBI sets. The COBI M3A1 Stuart features 490 lego compatible parts and is perfect for displaying in your man cave. The COBI M3 Stuart tank’s turret, cannon and tracks all move freely and it comes with one COBI mini-figure.

The new COBI M3A1 STUART COH3 Tank (3048) is the latest in the new Company of Heroes 3 official licensed COBI sets. The COBI M3A1 Stuart features 490 lego compatible parts and is perfect for displaying in your man cave. The COBI M3 Stuart tank’s turret, cannon and tracks all move freely and it comes with one COBI mini-figure.

The COBI Stuart tank is presented in 1/35th scale and is perfectly sized for your display shelf. COBI also makes 1/28th scale sets that are extremely popular as well but are substantially larger in size.

The COBI M3A1 Stuart tank is best suited for adults but children and young adults will be able to build it by themselves or with a little help from adults.

The COBI M3 light Tank features “pad printed” markings so no stickers are necessary. The tank’s turret spins freely and the cannon mantlet and tracks all move as well. there are lots of nice small details like boxes and weapons that will attract your friends bugger fingers so you might want to place a “don’t touch” sign in front of it.  That isn’t to say that its too delicate to touch, on the contrary, COBI Bricks while compatible with Lego, feature a slightly stronger “clutch” power so they tend to stay together better than LEGO.

The M3 Stuart/Light Tank M3, was an American light tank of World War II. An improved version of the tank entered service as the M5 in 1942 to be supplied to British and other Commonwealth forces under lend-lease prior to the entry of the U.S. into the war. Afterwards, it was used by U.S. and Allied forces until the end of the war.

The British service name “Stuart” came from the American Civil War Confederate general J. E. B. Stuart and was used for both the M3 and the derivative M5 Light Tank. (They were also often called “Honeys” by the British, because of their smooth ride.) In U.S. use, the tanks were officially known as “Light Tank M3” and “Light Tank M5”.

Stuarts were first used in combat in the North African campaign; about 170 were used by the British forces in Operation Crusader (18 November – 30 December 1941). Stuarts were the first American-crewed tanks in World War II to engage the enemy in tank versus tank combat when used in the Philippines in December 1941 against the Japanese. Outside of the Pacific War, in later years of WWII the M3 was used for reconnaissance and screening.

The game has features new to the series such as the Tactical Pause system, which allows the player to pause a battle and queue up commands to be done after the game is resumed. Company of Heroes 3 also has an improved destruction system that gives the title more granular destruction, such as individual tiles and bricks crumbling off buildings. Italian Partisans are allied NPCs that can either be used on the map or be called in during battles. The story is dynamic, and the player’s interactions with the game’s various commanders can affect the narrative’s ending.

Warbricks is a family owned small business based in Billings, MT. We specialize in the COBI brand of building bricks and ship fast from our home business garage.  We love our customers and appreciate all the support. Every order helps put food on our table and teaches business skills to our three children who are homeschooled and own a stake in the business.