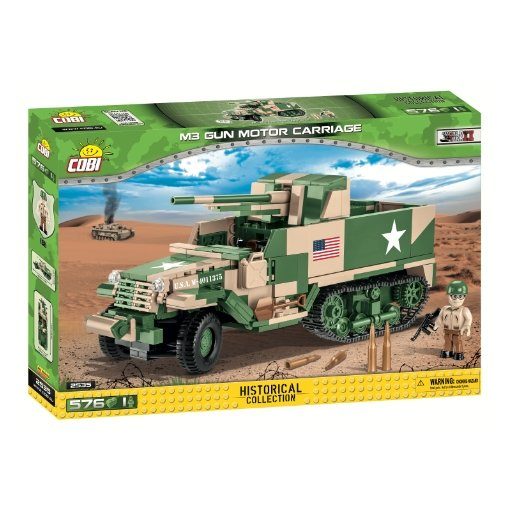 The COBI M3 Gun Motor Carriage Set features 576 highly detailed brick parts and colorful, easy to read detailed instructions.  The COBI M3 Gun Motor Carriage parts all work perfectly with LEGO and you will be impressed with the quality of COBI sets.  FREE Shipping on orders over $50! Ships fast with tracking number from our Montana USA home business.

The COBI M3 Gun Motor Carriage Set  features 576 highly detailed brick parts and colorful, easy to read detailed instructions.  The COBI M3 Gun Motor Carriage parts all work perfectly with LEGO and you will be impressed with quality of COBI sets.  COBI Sets differ in that they offer many more pieces and the majority of the parts are unique to COBI.  You can learn more about the similarities and differences between COBI and LEGO here.

The COBI M3 Gun half-track includes 1 figure and all the markings are pad printed so stickers are not necessary.

Both Cobi collectors and brick enthusiast will get hours of enjoyment from this COBI M3 Gun Motor Carriage Set.  Whether you are buying to display or play, Cobi Brick sets will not disappoint.  Ships quickly from Billings, MT USA with tracking number.

The M3 Gun Motor Carriage (GMC) was a United States Army tank destroyer equipped with a 75 mm M1897A4 gun, which was built by the Autocar Company during World War II.

After observing the new and often decisive, uses of armored vehicles on both sides during the French campaign of 1940, the US Army decided that it required a 75 mm self-propelled gun, based on the chassis of the M3 Half-track. This was initially known as the T12. However, after the addition of features such as the gun shield from the M2A3 (a carriage for the M1897A4), the new vehicle entered production under the name M3 Gun Motor Carriage (or M3 GMC). Because the number of M2A3 gun shields available was insufficient for the M3 GMC order, a new gun shield was designed. Variants featuring the new shield were designated M3A1 GMC.

The T12/M3 first served in the Philippines Campaign in 1942 with the Provisional Field Artillery Brigade in the anti-tank and the fire-support role. It then served in North Africa in tank destroyer battalions. It was used ineffectively in the Battle of Kasserine Pass and several other engagements, but was used with success in the Battle of El Guettar. It also served in the Allied invasion of Sicily, but was eventually superseded by the M10 tank destroyer. A total of 2,203 were produced, of which 1,361 were converted back into M3A1 half-tracks.