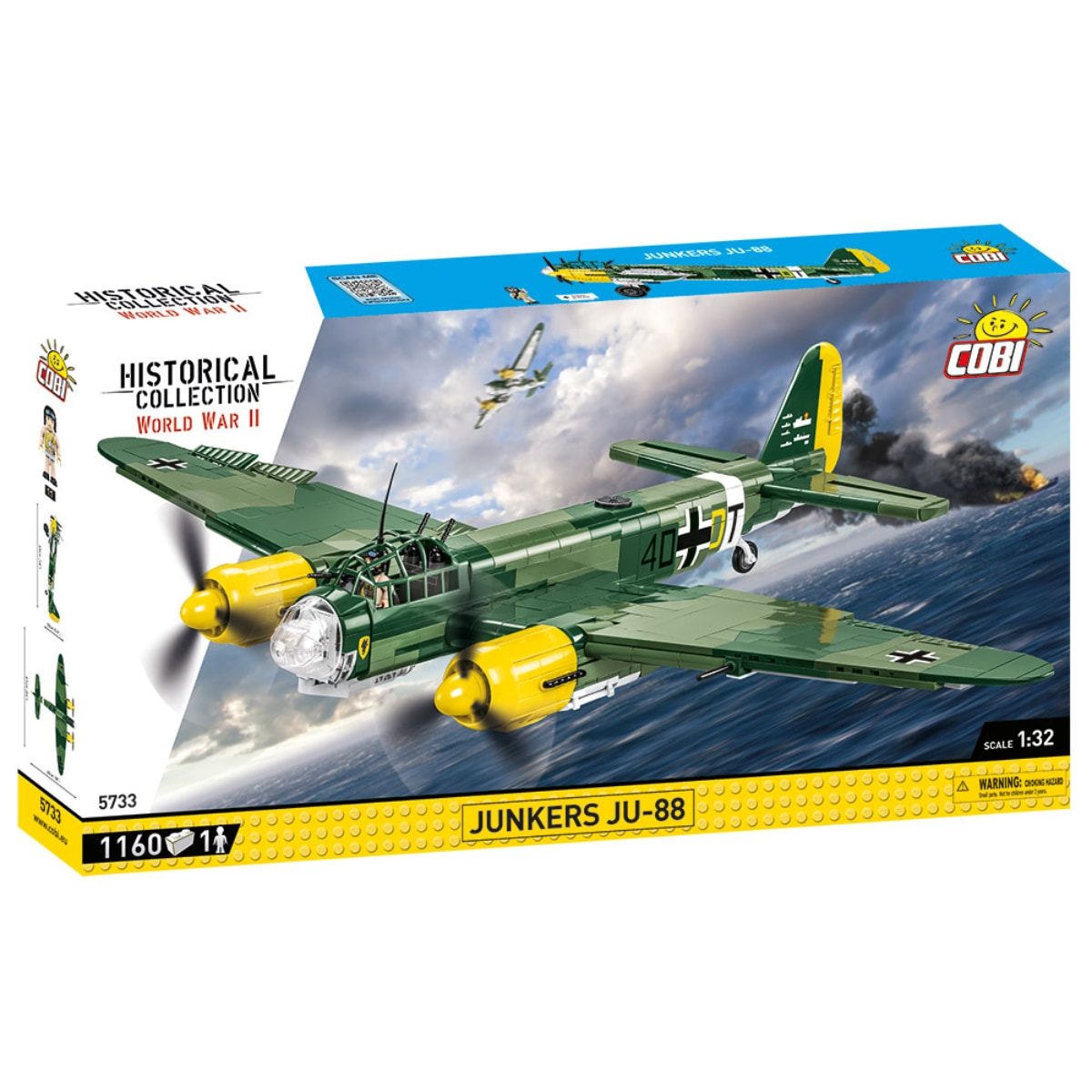 The COBI Junkers JU-88 (5733) comes with 1160 high quality parts that fit tightly so that your COBI aircraft set will be awesome for both display or play. It also comes with one COBI mini figure pilot. Shipping is free over $50

Did you grow up building LEGOs and wishing they would make military brick sets? Well we did and thankfully we have COBI military bricks like the COBI Junkers JU-88 (5733) set! The COBI Junkers JU88 is compatible with LEGO in both quality and interchangeability. You will notice that COBI makes unique parts that help make builds like the COBI JU88 stand out as a true collector masterpiece.

Speaking of parts, the COBI Junkers JU-88 (5733) comes with 1160 high quality parts that fit tightly so that your COBI aircraft set will be awesome for both display or play. It also comes with one COBI mini figure pilot.

All the COBI Junkers part’s are pad printed which means there are no messy decals and you just need to follow the detailed instructions (included) in order to assemble the parts correctly.

About the COBI Junkers JU88:

The COBI COBI Junkers JU-88 (5733) set makes a great conversation piece and it will also make a great giver for the military brick collector in your life.

The Junkers Ju 88 is a German World War II Luftwaffe twin-engined multirole combat aircraft. Junkers Aircraft and Motor Works (JFM) designed the plane in the mid-1930s as a so-called Schnellbomber (“fast bomber”) that would be too fast for fighters of its era to intercept. It suffered from technical problems during its development and early operational periods but became one of the most versatile combat aircraft of the war. Like a number of other Luftwaffe bombers, it served as a bomber, dive bomber, night fighter, torpedo bomber, reconnaissance aircraft, heavy fighter and at the end of the war, as a flying bomb.

Despite a protracted development, it became one of the Luftwaffe‘s most important aircraft. The assembly line ran constantly from 1936 to 1945 and more than 15,000 Ju 88s were built in dozens of variants, more than any other twin-engine German aircraft of the period. Throughout production the basic structure of the aircraft remained unchanged.

Learn more about the real aircraft that inspired the COBI Junkers JU-88 (5733) here.