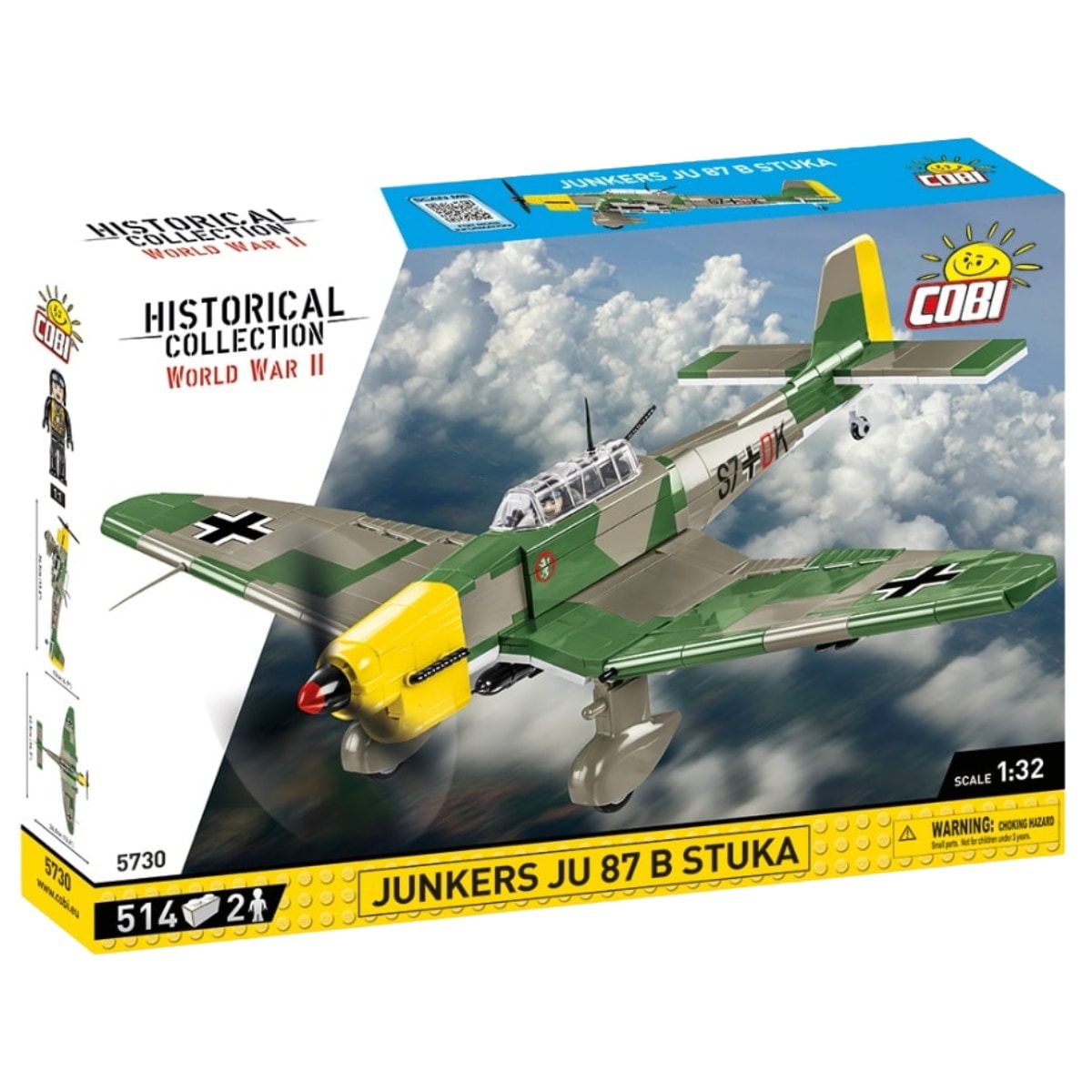 The COBI JU 87 B Stuka (5730) features 514 highly detailed brick parts and colorful, easy to read detailed instructions.  The Cobi Stuka Set parts all work with LEGO and you will be impressed with the great quality and detail of this Cobi brick set.

The COBI JU 87 B Stuka (5730) features 514 highly detailed brick parts and colorful, easy to read detailed instructions.  The Cobi Stuka Set parts all work with LEGO and you will be impressed with the great quality and detail of this Cobi brick set.

The COBI JU 87 B Stuka Set includes 2 figures and all the markings are pad printed so stickers are not necessary.

Military Brick enthusiasts will get hours of enjoyment from this COBI Junkers JU87B Stuka.  Whether you are buying to display or play, Cobi Brick sets will not disappoint.  Ships quickly from Billings, MT USA with tracking number.

The Junkers Ju 87 or Stuka (from Sturzkampfflugzeug, “dive bomber”) was a German dive bomber and ground-attack aircraft. Designed by Hermann Pohlmann, it first flew in 1935. The Ju 87 made its combat debut in 1937 with the Luftwaffe’s Condor Legion during the Spanish Civil War and served the Axis forces in World War II.

The aircraft was easily recognisable by its inverted gull wings and fixed spatted undercarriage. Upon the leading edges of its faired main gear legs were mounted the Jericho-Trompete (Jericho trumpet) wailing sirens, becoming the propaganda symbol of German air power and the so-called blitzkrieg victories of 1939–1942. The Stuka’s design included several innovations, including automatic pull-up dive brakes under both wings to ensure that the aircraft recovered from its attack dive even if the pilot blacked out from the high g-forces.

The Ju 87 operated with considerable success in close air support and anti-shipping at the outbreak of World War II. It led air assaults in the invasion of Poland in September 1939. Stukas were critical to the rapid conquest of Norway, the Netherlands, Belgium and France in 1940. Sturdy, accurate, and very effective against ground targets, the Stuka was, like many other dive bombers of the period, vulnerable to fighter aircraft. During the Battle of Britain its lack of manoeuvrability, speed and defensive armament meant that it required a heavy fighter escort to operate effectively.

After the Battle of Britain the Stuka was used in the Balkans Campaign, the African and Mediterranean theatres and the early stages of the Eastern Front where it was used for general ground support, as an effective specialised anti-tank aircraft and in an anti-shipping role. Once the Luftwaffe lost air superiority, the Stuka became an easy target for enemy fighter aircraft. It was produced until 1944 for lack of a better replacement. By 1945 ground-attack versions of the Focke-Wulf Fw 190 had largely replaced the Ju 87, but it remained in service until the end of the war.