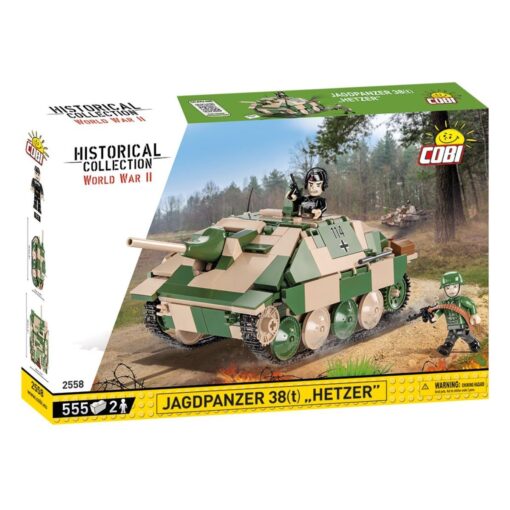 The COBI Jagdpanzer 38T Hetzer Set (2558) features 555 highly detailed brick parts and colorful, easy to read detailed instructions.  The COBI Hetzer Set parts all work perfectly with LEGO and you will be impressed with the quality of COBI sets.  COBI Sets differ in that they offer many more pieces and the majority of the parts are unique to COBI.  You can learn more about the similarities and differences between COBI and LEGO here.

The COBI Jagdpanzer Hetzer Set (2558) includes 2 figures and all the markings are pad printed so stickers are not necessary.

Both collectors and brick enthusiasts will get hours of enjoyment from this COBI Jagdpanzer 38T Hetzer Set (2558) .  Whether you are buying to display or play, Cobi Brick sets will not disappoint.  Ships quickly from Billings, MT USA with tracking number.

The Jagdpanzer 38 (Sd.Kfz. 138/2), originally the Panzerjäger 38(t), known mostly post-war as Hetzer, was a German light tank destroyer of the Second World War based on a modified Czechoslovakian Panzer 38(t) chassis.

German armored forces in World War II created a variety of vehicles by mounting anti-tank guns on obsolete tank chassis. These machines performed even better than expected, yet were still vulnerable due to high vehicle profiles and open-topped turrets. Allied bombings took a heavy toll on German production facilities, and further increased the need for an easily produced yet effective light tank destroyer to replace vehicles like the StuG III and Marder series. Prototypes of the Jagdpanzer 38 were ready by 1944 and mass production began in April of that year. The Jagdpanzer 38 was covered entirely with sloped armor, and possessed a compact form and low silhouette, giving it much improved defensive ability over other self-propelled guns. Armament consisted of a 7.5 cm Pak 39 L/48 gun in fixed mounting as well as a remote-controlled MG 34. It featured a wide body to accommodate the four-man crew, as well as strengthened lower hull with enlarged wheels, guide rollers and tracks.

Jagdpanzer 38s first entered service in July 1944, and would eventually be assigned to a number of units, including infantry, Panzerjäger and Volksgrenadier divisions. BMM and Škoda continually modified and improved the Jagdpanzer 38 during production of the more than 2,800 vehicles built. Owing to the ease of production and high operating rates, the Jagdpanzer 38 came to serve as Germany’s main tank destroyer in the latter period of the war, making an important contribution on both the Eastern and Western Fronts.