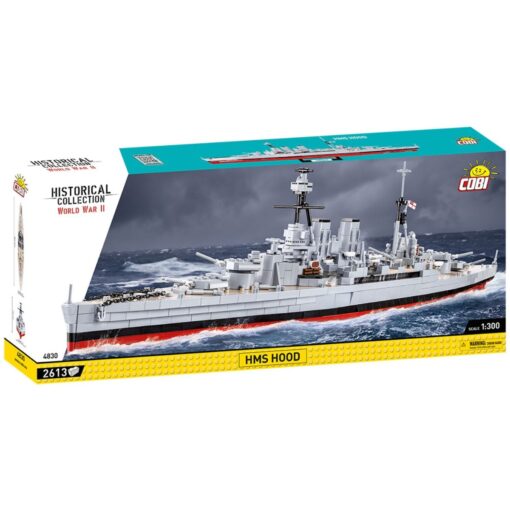 The COBI HMS Hood Set (4830) features 2620 highly detailed brick parts and colorful, easy to read detailed instructions.  The COBI HMS Hood Set parts all work perfectly with LEGO and you will be impressed with LEGO quality of COBI sets.  FREE Shipping on orders over $50! Ships fast with tracking number from our Montana USA home business.

The COBI HMS Hood Set (4830) features 2620 highly detailed brick parts and colorful, easy to read detailed instructions.  The COBI HMS Hood Set parts all work perfectly with LEGO and you will be impressed with the quality of COBI sets.  COBI Sets differ in that they offer many more pieces and the majority of the parts are unique to COBI.

Both collectors and military brick enthusiasts will get hours of enjoyment from this COBI HMS Hood Set (4830) .  Whether you are buying to display or play, Cobi Brick sets will not disappoint.  Ships quickly from Billings, MT USA with tracking number.

HMS Hood (pennant number 51) was a battlecruiser of the Royal Navy. Hood was the first of the planned four Admiral-class battlecruisers to be built during World War I. Already under construction when the Battle of Jutland occurred in mid-1916, that battle revealed serious flaws in her design despite drastic revisions before she was completed four years later. For this reason, she was the only ship of her class to be completed, as the Admiralty decided it would be better to start with a clean design on succeeding battlecruisers, leading to the never-built G-3 Class. Despite the appearance of newer and more modern ships, Hood remained the largest warship in the world for 20 years after her commissioning, and her prestige was reflected in her nickname, “The Mighty Hood”.

When war with Germany was declared, Hood was operating in the area around Iceland, and she spent the next several months hunting for German commerce raiders and blockade runners between Iceland and the Norwegian Sea. After a brief overhaul of her propulsion system, she sailed as the flagship of Force H, and participated in the destruction of the French fleet at Mers-el-Kebir. Relieved as flagship of Force H, Hood was dispatched to Scapa Flow, and operated in the area as a convoy escort and later as a defence against a potential German invasion fleet.

In May 1941, Hood and the battleship Prince of Wales were ordered to intercept the German battleship Bismarck and the heavy cruiser Prinz Eugen, which were en route to the Atlantic, where they were to attack convoys. On 24 May 1941, early in the Battle of the Denmark Strait, Hood was struck by several German shells, exploded, and sank within 3 minutes, with the loss of all but three of her crew of 1418. Due to her publicly perceived invincibility, the loss affected British morale.