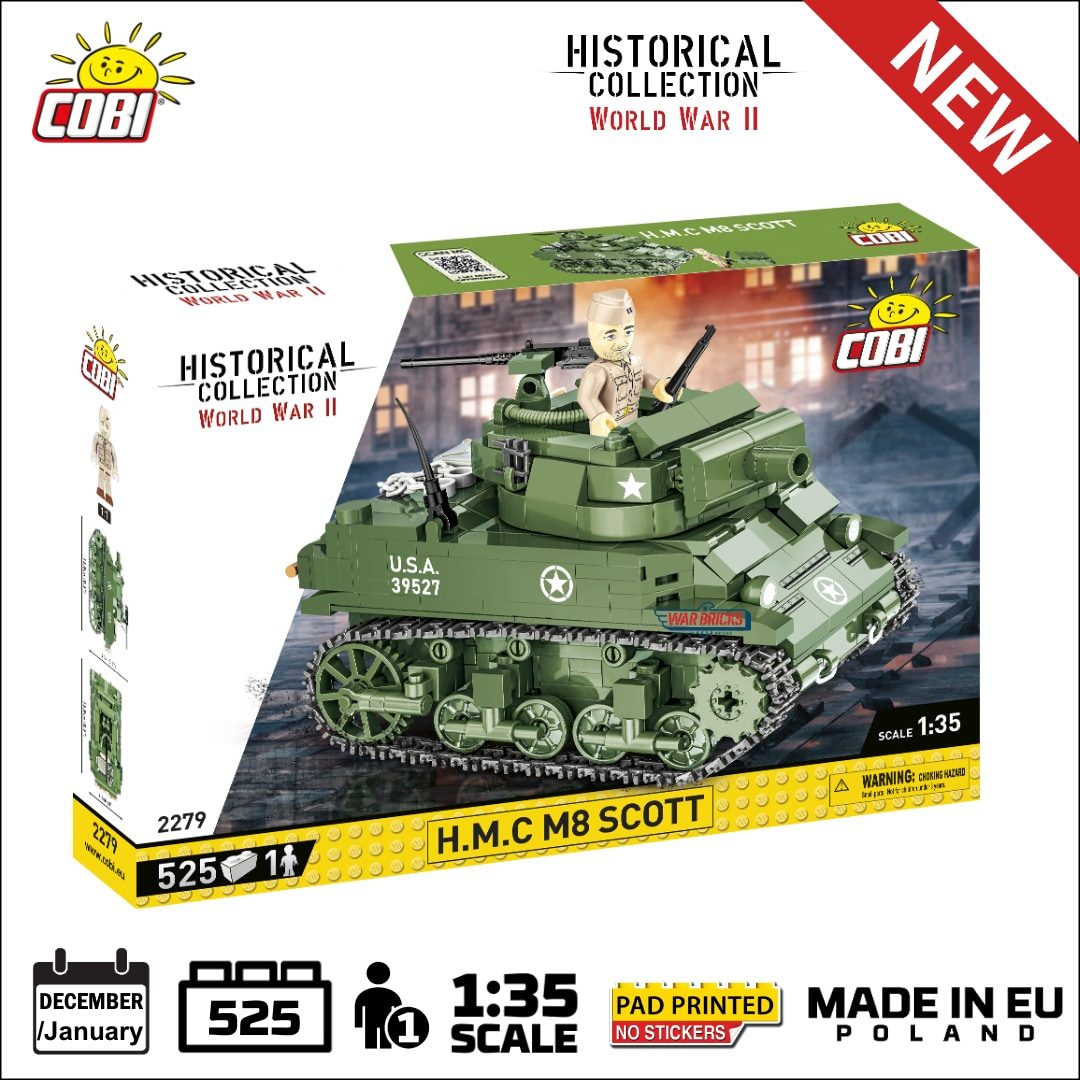 The COBI H.M.C M8 SCOTT is best suited for adults but children and young adults will be able to build it by themselves or with a little help from adults.

The COBI H.M.C M8 SCOTT is best suited for adults but children and young adults will be able to build it by themselves or with a little help from adults.

The COBI M8 light Tank features “pad printed” markings so no stickers are necessary. The tank’s turret spins freely and the cannon mantlet and tracks all move as well. there are lots of nice small details like chains and tools that will attract your friends bugger fingers so you might want to place a don’t touch sight in front of it.  That isn’t to say that its too delicate to touch, on the contrary, COBI Bricks while compatible with Lego, feature a slightly stronger “clutch” power so they tend to stay together better than LEGO.

The COBI HMC M8 SCOTT light tank is a 1/35th scale set and includes one mini-figure.

The COBI SCOTT Tank Set is 5.3″ long and 3.5″ tall and is made in Poland using the same grade materials as LEGO.

Tanks-Encyclopedia.com has a pretty detailed page on the M8 SCOTT history, a sample of which we have aded below:

The large-scale production of the M5 quickly led to several variant prototypes, including self-propelled artillery. One of these project was a Howitzer Motor Carriage, equipped with the regular ordinance 75 mm (2.95 in) howitzer used throughout the war by the US Army and the Marines Corps. The basis was a M5 chassis, with its turret removed and replaced by a new open-top model, larger, with a short-barrel M2 howitzer and 45 rounds of ammo. This prototype was named T17E1 HMC. The M2 howitzer, a more advance version of the compact M1A1, was eventually replaced by the M3. Ammunition included M89 smoke shells and regular M48 HE (High Explosive) antipersonal rounds. The only other weapon on board -besides the personal guns of the crew- was a Browning M2HB cal.50 (12.7 mm) machine gun mounted on the turret rear, intended for anti-aircraft defense, with 400 rounds.

Warbricks is a family owned small business based in Billings, MT. We specialize in the COBI brand of building bricks and ship fast from our home business garage.  We love our customers and appreciate all the support. Every order helps put food on our table and teaches business skills to our three children who are homeschooled and own a stake in the business.