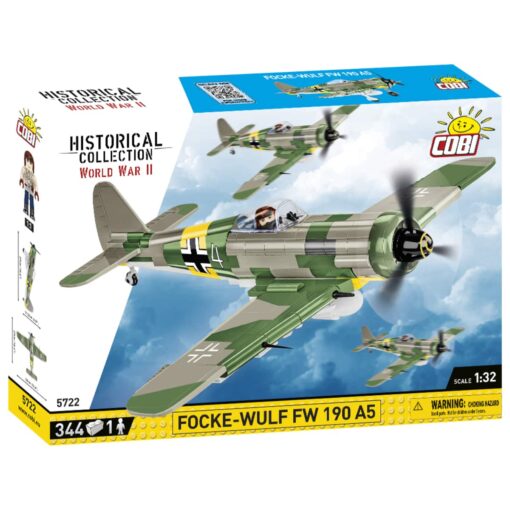 The COBI Focke Wulf FW190 A5 Set (5722) features 344 highly detailed brick parts and colorful, easy to read detailed instructions.  The COBI Foke Wulf parts all work perfectly with LEGO and you will be impressed with LEGO quality of COBI sets.  FREE Shipping on orders over $50! Ships fast with tracking number from our Montana USA home business.

The COBI Focke Wulf FW190 A5 Set (5722) features 344 highly detailed brick parts and colorful, easy to read detailed instructions.  The COBI Focke Wulf 190 A5’s parts all work perfectly with LEGO and you will be impressed with the quality of COBI sets.  COBI Sets differ in that they offer many more pieces and the majority of the parts are unique to COBI.  You can learn more about the similarities and differences between COBI and LEGO here.

The COBI Focke Wulf  set includes 1 figure and all the markings are pad printed so stickers are not necessary.

Both children and adults will get hours of enjoyment from this COBI Focke Wulf FW 190 set. This set works great with he Cobi Spitfire set sold here.

Whether you are buying to display or play, Cobi Brick sets will not disappoint.  Ships quickly from Billings, MT USA with tracking number.

How Wide is the COBI Focke Wulf?

The Focke-Wulf Fw 190 Würger (English: Shrike) was a German single-seat, single-engine fighter aircraft designed by Kurt Tankin the late 1930s and widely used during World War II. Along with its well-known counterpart, the Messerschmitt Bf 109, the Fw 190 became the backbone of the Luftwaffe’s Jagdwaffe (Fighter Force). The twin-row BMW 801 radial engine that powered most operational versions enabled the Fw 190 to lift larger loads than the Bf 109, allowing its use as a day fighter, fighter-bomber, ground-attack aircraft and, to a lesser degree, night fighter.

The Fw 190A started flying operationally over France in August 1941, and quickly proved superior in all but turn radius to the Royal Air Force’s main front-line fighter, the Spitfire Mk. V, particularly at low and medium altitudes. The 190 maintained superiority over Allied fighters until the introduction of the improved Spitfire Mk. IX. In November/December 1942, the Fw 190 made its air combat debut on the Eastern Front, finding much success in fighter wings and specialised ground attack units called Schlachtgeschwader (Battle Wings or Strike Wings) from October 1943 onwards.
The Fw 190A series’ performance decreased at high altitudes (usually 6,000 m (20,000 ft) and above), which reduced its effectiveness as a high-altitude interceptor. From the Fw 190’s inception, there had been ongoing efforts to address this with a turbosupercharged BMW 801 in the B model, the much longer-nosed C model with efforts to also turbocharge its chosen Daimler-Benz DB 603 inverted V12 powerplant, and the similarly long-nosed D model with the Junkers Jumo 213. Problems with the turbocharger installations on the -B and -C subtypes meant only the D model entered service in September 1944. These high-altitude developments eventually led to the Focke-Wulf Ta 152, which was capable of extreme speeds at medium to high altitudes ( 755 km/h (408 kn; 469 mph) at 13,500 m (44,300 ft)). While these “long nose” 190 variants and the Ta 152 derivative especially gave the Germans parity with Allied opponents, they arrived too late to affect the outcome of the war.

The Fw 190 was well-liked by its pilots. Some of the Luftwaffe’s most successful fighter aces claimed many of their kills while flying it, including Otto Kittel, Walter Nowotny and Erich Rudorffer. The Fw 190 provided greater firepower than the Bf 109 and, at low to medium altitude, superior manoeuvrability, in the opinion of German pilots who flew both fighters. It was regarded as one of the best fighter planes of World War II.Find out more about the real COBI Focke Wulf FW 190 Fighter Set (5722) at Wikedpedia here.https://en.wikipedia.org/wiki/Focke-Wulf_Fw_190

Warbricks.com is a family owned business. As we stand behind all our products and want you to know that Cobi is compatible with other top quality building bricks. We started Warbricks after we saw how much our own children loved playing with Cobi Tanks and airplanes.  We believe your family and loved ones will love them as well.