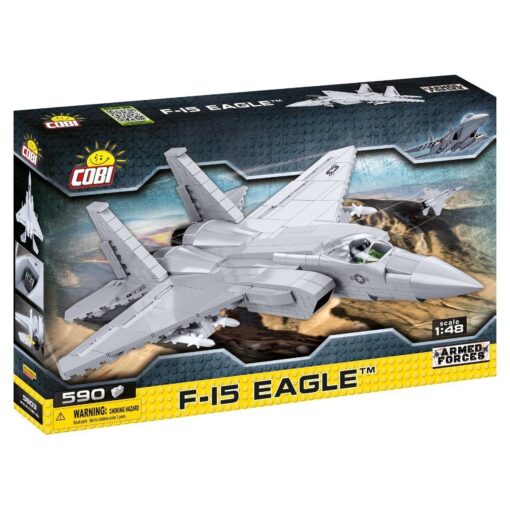 The COBI F-15 Eagle Set features 590 highly detailed brick parts and colorful, easy to read detailed instructions.  The COBI F15 Fighter Jet Parts parts all work perfectly with LEGO and you will be impressed with quality of COBI sets.  COBI Sets differ in that they offer many more pieces and the majority of the parts are unique to COBI.  You can learn more about the similarities and differences between COBI and LEGO here.

The COBI F-15 Eagle Fighter Jet includes one 12 figure and all the markings are pad printed so stickers are not necessary.
Both children and adults will get hours of enjoyment from this COBI F-15 Eagle Set (5803).  Whether you are buying to display or play, Cobi Brick sets will not disappoint.  Ships quickly from Billings, MT USA with tracking number.

The McDonnell Douglas F-15 Eagle is an American twin-engine, all-weather tactical fighter aircraft designed by McDonnell Douglas (now part of Boeing). Following reviews of proposals, the United States Air Force selected McDonnell Douglas’s design in 1967 to meet the service’s need for a dedicated air superiority fighter. The Eagle first flew in July 1972, and entered service in 1976. It is among the most successful modern fighters, with over 100 victories and no losses in aerial combat, with the majority of the kills by the Israeli Air Force.

The Eagle has been exported to Israel, Japan, and Saudi Arabia. The F-15 was originally envisioned as a pure air-superiority aircraft. Its design included a secondary ground-attack capability that was largely unused. The aircraft design proved flexible enough that an all-weather strike derivative, the F-15E Strike Eagle, an improved and enhanced version which was later developed, entered service in 1989 and has been exported to several nations. As of 2017, the aircraft is being produced in different variants.

Learn more about the real jet that inspired the COBI F-15 Eagle Set here at wikipedia.