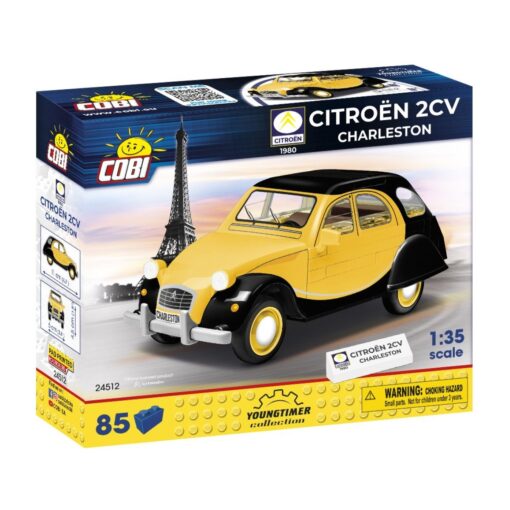 The COBI Citroen 2VC Charleston Set (24512) features 85 highly detailed brick parts and colorful, easy to read detailed instructions.  The COBI Citroen 2VC Charleston Set parts all work perfectly with LEGO and you will be impressed with the quality of COBI sets.  COBI Sets differ in that they offer many more pieces and the majority of the parts are unique to COBI.  You can learn more about the similarities and differences between COBI and LEGO here.

The COBI Citroen 2VC Charleston’s markings are pad printed so stickers are not necessary.

Both children and adults will get hours of enjoyment from this COBI Citroen 2VC Charleston Set (24512) .  Whether you are buying to display or play, Cobi Brick sets will not disappoint.  Ships quickly from Billings, MT USA with tracking number.

The Citroën 2CV is an air-cooled front-engine, front-wheel-drive, economy family car, introduced at the 1948 Paris Mondial de l’Automobile, and manufactured by Citroën for model years 1948–1990.

Conceived by Citroën Vice-President Pierre Boulanger to help motorize the large number of farmers still using horses and carts in 1930s France, the 2CV has a combination of innovative engineering and straightforward, utilitarian bodywork — at first with extra thin panels, reinforced by corrugating the metal. The 2CV featured overall low cost of ownership, simplicity of maintenance, an easily serviced air-cooled engine (originally offering 9 hp), and minimal fuel consumption. In addition, it had literally been designed to cross a freshly plowed field, because of the great lack of paved roads in France then; with a long-travel suspension system, that connects front and rear wheels, giving a very soft ride.

Often called “an umbrella on wheels”, the fixed-profile convertible bodywork featured a full-width, canvas, roll-back sunroof, which accommodated oversized loads, and until 1955 even stretched to cover the car’s trunk, reaching almost down to the car’s rear bumper.

Michelin introduced and first commercialized the revolutionary new radial tyre design with the introduction of the 2CV.

Manufactured between 1948 and 1990, more than 3.8 million 2CVs were produced, making it the world’s first front-wheel drive car to become a million seller, after Citroën’s own, more upscale Traction Avant was the first front-wheel drive car to sell in six-figure numbers. The 2CV platform spawned many variants, as detailed in the “Production numbers” section. The 2CV and its variants are collectively known as the A-Series. Notably these include the 2CV-based delivery vans known as fourgonnettes, the Ami, the Dyane, the Acadiane, and the Mehari. In total, Citroën manufactured over 9 million of the 2CVs and its derivative models.

A 1953 technical review in Autocar described “the extraordinary ingenuity of this design, which is undoubtedly the most original since the Model T Ford”.  In 2011, The Globe and Mail called it a “car like no other”. The motoring writer L. J. K. Setright described the 2CV as “the most intelligent application of minimalism ever to succeed as a car”, and a car of “remorseless rationality”.

Both the design and the history of the 2CV mirror the Volkswagen Beetle in significant ways. Conceived in the 1930s, to make motorcars affordable to regular people for the first time in their countries, both went into large scale production in the late 1940s, featuring air-cooled boxer engines at the same end as their driven axle, omitting a length-wise drive shaft, riding on exactly the same 2,400 mm (94.5 in) wheelbase, and using a platform chassis to facilitate the production of derivative models. Just like the Beetle, the 2CV became not only a million seller, but also one of the few cars in history to continue a single generation in production for over four decades.