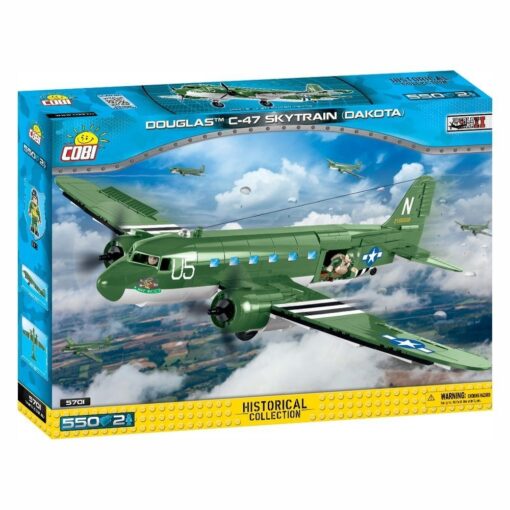 The COBI C47 Skytrain Set features 550 highly detailed brick parts and colorful, easy to read detailed instructions.  The COBI C47 Set parts all work with the “other major brand” and you will be pleasantly surprised and the great quality and detail of this Cobi set. Made in the EU and shipped from Montana, USA.

The COBI C47 Skytrain Set features 550 highly detailed brick parts and colorful, easy to read detailed instructions.  The COBI Douglas C47 Set parts all work with the “other major brand” and you will be pleasantly surprised and the great quality and detail of this Cobi set. Made in the EU and shipped from Montana, USA. Want extra airborne soldiers? Buy the War Bricks D-Day C-47 Combo Set here!

The COBI DC-3 Set includes 2 figures and all the markings are via included stickers. This set goes great with the COBI 82nd Airborne Division Figure Set

Both children and adults will get hours of enjoyment from this COBI C47 Skytrain Set.  Whether you are buying to display or play, Cobi Brick sets will not disappoint.  Ships quickly from Billings, MT USA with tracking number.

The C-47 differed from the civilian DC-3 in numerous modifications, including being fitted with a cargo door, hoist attachment, and strengthened floor, along with a shortened tail cone for glider-towing shackles, and an astrodomein the cabin roof.
The specialized C-53 Skytrooper troop transport started production in October 1941 at Douglas Aircraft’s Santa Monica plant. It lacked the cargo door, hoist attachment, and reinforced floor of the C-47. Only 380 aircraft were produced in all because the C-47 was found to be more versatile.

The C-47 was vital to the success of many Allied campaigns, in particular, those at Guadalcanal and in the jungles of New Guinea and Burma, where the C-47 and its naval version, the R4D, made it possible for Allied troops to counter the mobility of the light-traveling Japanese Army. C-47s were used to airlift supplies to the encircled American forces during the Battle of Bastogne in Belgium. Possibly its most influential role in military aviation, however, was flying “The Hump” from India into China. The expertise gained flying “The Hump” was later used in the Berlin Airlift, in which the C-47 played a major role until the aircraft were replaced by Douglas C-54 Skymasters.

In Europe, the C-47 and a specialized paratroop variant, the C-53 Skytrooper, were used in vast numbers in the later stages of the war, particularly to tow gliders and drop paratroops. During the invasion of Sicily in July 1943, C-47s dropped 4,381 Allied paratroops. More than 50,000 paratroops were dropped by C-47s during the first few days of the D-Day campaign also known as the invasion of Normandy, France, in June 1944. In the Pacific War, with careful use of the island landing strips of the Pacific Ocean, C-47s were used for ferrying soldiers serving in the Pacific theater back to the United States.

About 2,000 C-47s (received under Lend-Lease) in British and Commonwealth service took the name “Dakota”, possibly inspired by the acronym “DACoTA” for Douglas Aircraft Company Transport Aircraft.
The C-47 also earned the informal nickname “gooney bird” in the European theatre of operations  Other sources attribute this name to the first aircraft, a USMC R2D—the military version of the DC-2—being the first aircraft to land on Midway Island, previously home to the long-winged albatross known as the gooney bird which was native to Midway.