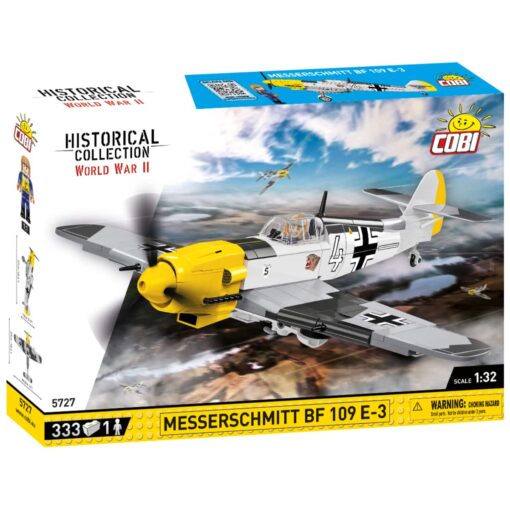 The Cobi BF 109 E-3 Brick Set (5727) features 333 highly detailed pieces along with detailed instructions similar to those you may already be familiar with growing up playing with brick sets. This is a Warbricks Edition Eligible product. Add to cart to see!

The Cobi BF 109 E-3 Brick Set (5727) features 333 highly detailed pieces along with detailed instructions similar to those you may already be familiar with growing up playing with brick sets.  The Cobi BF 109 E3 Set is sure to be a great set easy to build and will provide hours of great playtime!  After its all over, the Cobi parts will work just fine with other brand building blocks as they are in some cases even higher quality.  Purchase with confidence as we stand behind our products!  Our kids love them and so will yours!

The COBI BF 109 Set Comes with one figure.

About the Messerschmitt BF 109 F-2

The first redesign came with the E series, including the naval variant, the Bf 109T (T standing for Träger, carrier). The Bf 109E (Emil) introduced structural changes to accommodate the heavier and more powerful 1,100 PS (1,085 HP) Daimler-Benz DB 601 engine, heavier armament and increased fuel capacity. Partly due to its limited 300 km (186 mile) combat radius on internal fuel alone, resulting from its 660 km (410 mile) range limit, later variants of the E series had a fuselage ordnance rack for fighter-bomber operations or provision for a long-range, standardized 300 litre (79 US gallon) drop-tank and used the DB 601N engine of higher power output. The 109E first saw service with the “Condor Legion” during the last phase of the Spanish Civil War and was the main variant from the beginning of World War II until mid-1941 when the 109F replaced it in the pure fighter role (Eight 109Es were assembled in Switzerland in 1946 by the Dornier-Werke, using licence-built airframes; a ninth airframe was assembled using spare parts.