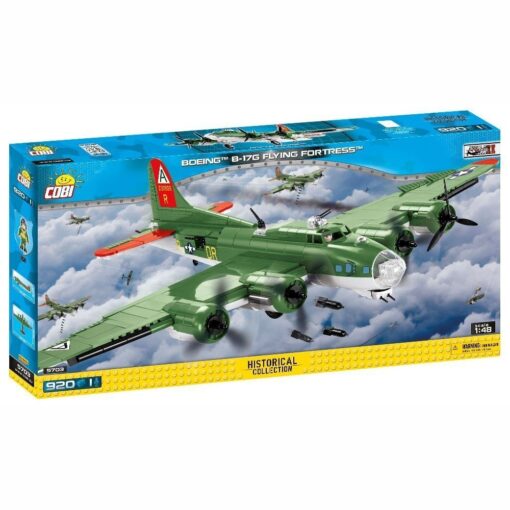 The COBI B-17G Flying Fortress Set features 920 highly detailed brick parts and colorful, easy to read detailed instructions.  The B-17G set parts all work with the “other major brand” and you will be pleasantly surprised and the great quality and detail of this Cobi set.

The COBI B-17G Flying Fortress Set features 920 highly detailed brick parts and colorful, easy to read detailed instructions.  The B-17G Bomber set parts all work with the “other major brand” and you will be pleasantly surprised and the great quality and detail of this Cobi set.

The B-17G set includes 2 figures and all the markings are pad printed so stickers are not necessary.

Both children and adults will get hours of enjoyment from this Cobi Boeing B-17G set.  Whether you are buying to display or play, Cobi Brick sets will not disappoint.  Ships quickly from Billings, MT USA with tracking number.

The Boeing B-17 Flying Fortress is a four-engined heavy bomber developed in the 1930s for the United States Army Air Corps(USAAC). Competing against Douglas and Martin for a contract to build 200 bombers, the Boeing entry (prototype Model 299/XB-17) outperformed both competitors and exceeded the air corps’ performance specifications. Although Boeing lost the contract (to the Douglas B-18 Bolo) because the prototype crashed, the air corps ordered 13 more B-17s for further evaluation. From its introduction in 1938, the B-17 Flying Fortress evolved through numerous design advances, becoming the third-most produced bomber of all time, behind the four-engined B-24 and the multirole, twin-engined Ju 88.

The B-17 was primarily employed by the USAAF in the daylight strategic bombing campaign of World War II against German industrial and military targets. The United States Eighth Air Force, based at many airfields in central, eastern and southern England, and the Fifteenth Air Force, based in Italy, complemented the RAF Bomber Command’s nighttime area bombing in the Combined Bomber Offensive to help secure air superiority over the cities, factories and battlefields of Western Europe in preparation for the invasion of France in 1944. The B-17 also participated to a lesser extent in the War in the Pacific, early in World War II, where it conducted raids against Japanese shipping and airfields.

As of October 2019, 9 aircraft remain airworthy, though none of them were ever flown in combat. Dozens more are in storage or on static display. The oldest of these is a D-series flown in combat in the Pacific and the Caribbean. https://en.wikipedia.org/wiki/Boeing_B-17_Flying_Fortress

Once your order is processed, you will receive an email with a tracking number that shows, on a map, where in the country your shipment is!  We always properly represent our inventory and if there is a problem or we make a mistake we will reach out and let you know ASAP!  We try to respond to all customer inquiries quickly but please remember that we are balancing work, school and family life!  You can contact us here or use the chat box on the screen.  We will always try to respond and address your concerns.