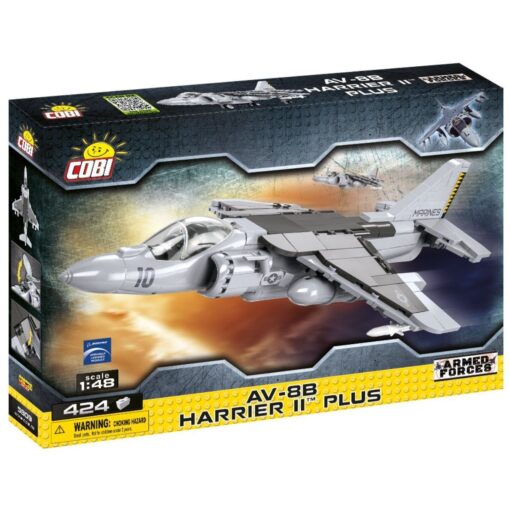 The COBI AV-8B Harrier II Plus (5809 Set features 410 highly detailed brick parts and colorful, easy to read detailed instructions.  The COBI AV-8B Harrier parts all work perfectly with LEGO and you will be impressed with the quality of COBI sets. FREE Shipping on orders over $50! Ships fast with tracking number from our Montana USA home business.

The COBI AV-8B Harrier II Plus (5809) features 410 highly detailed brick parts and colorful, easy to read detailed instructions.  The COBI Harrier parts all work perfectly with LEGO and you will be impressed with the quality of COBI sets.  COBI Sets differ in that they offer many more pieces and the majority of the parts are unique to COBI.  You can learn more about the similarities and differences between COBI and LEGO here.

The COBI AV-8B Harrier includes a 1/2 figure and all the markings are pad printed so stickers are not necessary.

Both collectors and brick enthusiasts will get value and hours of enjoyment from this COBI AV8B Harrier set.  Whether you are buying to display or play, Cobi Brick sets will not disappoint.  Ships quickly from Billings, MT USA with tracking number.

The McDonnell Douglas (now Boeing) AV-8B Harrier II is a single-engine ground-attack aircraft that constitutes the second generation of the Harrier Jump Jet family. Capable of vertical or short takeoff and landing (V/STOL), the aircraft was designed in the late 1970s as an Anglo-American development of the British Hawker Siddeley Harrier, the first operational V/STOL aircraft. The aircraft is primarily employed on light attack or multi-role missions, ranging from close air support of ground troops to armed reconnaissance. The AV-8B is used by the United States Marine Corps (USMC), the Spanish Navy, and the Italian Navy. A variant of the AV-8B, the British Aerospace Harrier II, was developed for the British military, while another, the TAV-8B, is a dedicated two-seat trainer.

Typically operated from small aircraft carriers, large amphibious assault ships and simple forward operating bases, AV-8Bs have participated in numerous military and humanitarian operations, proving themselves versatile assets. U.S. Army General Norman Schwarzkopf named the USMC Harrier II as one of several important weapons in the Gulf War. It has also served in Operation Enduring Freedom in Afghanistan since 2001, the Iraq War since 2003, and was used in Operation Odyssey Dawn in Libya in 2011. Italian and Spanish Harrier IIs have taken part in overseas conflicts in conjunction with NATO coalitions. During its service history, the AV-8B has had a high accident rate, related to the percentage of time spent in critical take-off and landing phases. USMC and Italian Navy AV-8Bs are to be replaced by the Lockheed Martin F-35B, with the former expected to operate its Harriers until 2025.

Learn more about the real aircraft that inspired the COBI AV-8B Harrier Set (5809) here at wikipedia.