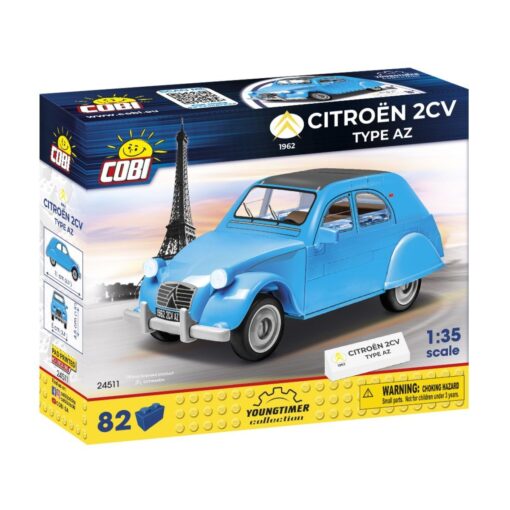 The COBI 1962 Citroen 2CW Type AZ (24511) is a high quality, made in Europe, brick set that is fully compatible with LEGO. The COBI  1962 Citroen 2CW features unique assortment of parts and easy to read detailed instructions in english. Regardless if you are an experienced brick collector or new to military bricks, COBI bricks will become your go to for highly detailed display and play military and historical bricks.

The COBI 1962 Citroen 2CW Type AZ (24511) is a high quality, made in Europe, brick set that is fully compatible with LEGO. The COBI 1962 Citroen features unique assortment of parts and easy to read detailed instructions in english. Regardless if you are an experienced brick collector or new to military bricks, COBI bricks will become your go to for highly detailed display and play military and historical bricks.

The COBI 1962 Citroen 2CW (24511)parts are all pad printed so no messy decals are necessary. Just make sure you place the marked parts in the appropriate place per the detailed COBI instruction booklet so that the desired appearance is achieved.

How many mini figures come with he Citroen 2CW?

Both adults and brick collectors of all ages will get hours of enjoyment from this COBI 1962 Citroen 2CW Type AZ (24511).  Whether you are buying to display or play, Cobi Military Brick sets will not disappoint.

In 1960 the production of the 375 cc engine ended. In the front fenders rectangular turn signals were integrated on some export models. The corrugated metal bonnet was replaced by a five-rib glossy cover. Simultaneously, the grille was slightly modified (flatter shape with a curved top edge).

The 2 CV 4 × 4 2CV Sahara appeared in December 1960. This had an additional engine-transmission unit in the rear, mounted the other way around and driving the rear wheels. For the second engine there was a separate push-button starter and choke. With a gearstick between the front seats, both transmissions were operated simultaneously. For the two engines, there were separate petrol tanks under the front seats. The filler neck sat in the front doors. Both engines (and hence axles) could be operated independently. The spare wheel was mounted on the bonnet. The car had ample off-road capability, but at twice the price of the standard 2CV. 694 were produced until 1968 and one more in 1971. Many were used by the Swiss Post as a delivery vehicle. Today they are highly collectible.

In 1960 the corrugated Citroën H Van style “ripple bonnet” of convex swages was replaced (except for the Sahara), with one using six larger concave swages and looked similar until the end of production. The 2CV had suicide doors in front from 1948 to 1964, replaced with front hinged doors from 1965 to 1990.

Director of publicity Claude Puech came up with humorous and inventive marketing campaigns. Robert Delpire of the Delpire Agency was responsible for the brochures.  Ad copy came from Jacques Wolgensinger Director of PR at Citroën.  Wolgensinger was responsible for the youth orientated “Raids”, 2CV Cross, rallies, the use of “Tin-Tin”, and the slogan “More than just a car—a way of life”.  A range of colours was introduced, starting with Glacier Blue in 1959, then yellow in 1960. In the 1960s 2CV production caught up with demand. In 1966 the 2CV got a third side window, This window made them look slightly bigger in size. In February 1965 Citroën Belgium introduced the 3CV AZAM6 which featured the 602 cc, 23 PS (16.9 kW; 22.7 hp) Ami6 engine and the Ami’s improved chassis. This version was manufactured until October 1967 and was also exported to certain continental markets although it was never offered in France.

In 1967, Citroën launched the new Dyane model, a direct derivative, based on the 2CV chassis, with an updated but similar, utilitarian body, distinguished by a hatchback that boosted practicality; (a hatchback kit was available from Citroën dealers for the 2CV, and aftermarket kits were available). This was in response to competition by the Renault 4. The exterior is more modern and distinguished by the integrated lights in the wings and bodywork. Between 1967 and 1983, about 1.4 million Dyanes were built. The Dyane was a more sophisticated 2CV, and originally planned to supersede it, but 2CV production continued by its side, and ultimately the 2CV outlived the Dyane by seven years. Citroën also developed the Méhari off-roader.

From 1965, the car was offered in some countries, at extra cost, with the flat-2 engine size increased to 602 cc (36.7 cu in), although for many years the smaller 425 cc (25.9 cu in) engine continued to be available in France and export markets where engine size determined car tax levels. This was replaced by an updated 435 cc (26.5 cu in) engine in February 1970

Cobi brick sets are compatible with all other top quality brick brands.  Cobi Bricks are made in Poland and the sets are full of unique parts made for adding realism to each set.  These sets may require more attention to build due to the numerous parts and “layered” approach that Cobi Brick sets use.  Cobi Brick sets come with super detailed and easy to use colored instructions.

Are COBI Sets appropriate for children?

COBI Brick Sets are great for children and adults but you should be aware that younger children will need help with larger sets due to the huge number of parts and layered building style. We always encourage trying out one of the 1:48 scale tank sets to start out as they are smaller and are a great way to test the legendary COBI Brick quality.

Once your order is processed, you will receive an email with a tracking number that shows, on a map, where in the country your shipment is!  We always properly represent our inventory and if there is a problem or we make a mistake we will reach out and let you know ASAP!  We try to respond to all customer inquiries quickly but please remember that we are balancing work, school and family life!  You can contact us here.  We will always try to respond and address your concerns. See our returns policy here.

COBI Bricks are made in Europe and are shipped via shipping container to the east coast. We have no control over when they arrive as that is handled by COBI’s USA office. We do get approximate lead times and we make sets available for pre-order approximately 1-2 months before the sets are expected to arrive.  COBI sets do sometimes get delayed for various reasons but we do make a huge effort to ship out all pre-orders as soon as they arrive at our home business.

Shipping costs are very high for us due to the size of COBI boxes and the wight of the sets, so if you order multiple sets we typically send them out together and will set them aside until the pre-order set comes in. We encourage customers to make separate orders if they want the in stock sets to arrive before a pre-order set.